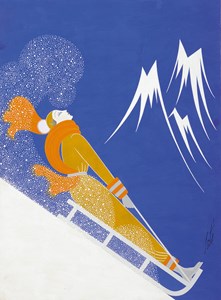 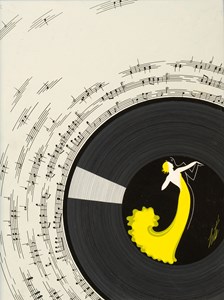 One of the best known artists of the Art Deco period, the Russian-born French artist Romain de Tirtoff, known as Erté, was renowned in particular for his drawings and illustrations of slim, elegant figures, exquisitely clad in imaginative and colourful costumes. Born in St. Petersburg to a military family named Tyrtov, with generations of naval officers in its lineage, he attended school at the naval base of Kronstadt, but at home was often surrounded by women who encouraged him in the decorative and creative arts. In 1900, at the age of eight, the young Tyrtov and his family visited the Exposition Universelle in Paris, which presented a comprehensive display of the Art Nouveau style. Determined to become an artist, Tyrtov studied under Russian portrait painter S. E. Repine, and by the age of fifteen was regularly contributing drawings to a Russian fashion magazine. In 1912, at the age of nineteen, he moved to Paris, where he studied briefly at the Académie Julian. It was in Paris that he adopted the pseudonym Erté (from the French phonetic pronunciation of the initials R and T of his name), partly to avoid disgracing his family, who had objected to his rejection of a naval career in favour of one devoted to art. In Paris he lived with his cousin, the Russian prince Nicolas Ourousoff, with whom he was to remain for nearly twenty years. In Paris, without knowing anyone, he began sending out his drawings. In 1913 he began working for the most influential fashion house in Paris, that of the couturier Paul Poiret. Under Poiret’s instruction, Erté produced numerous designs for accessories and dresses, as well as stage designs. With the outbreak of the First World War, Poiret was enlisted into military service as a designer of military uniforms, and was forced to close his fashion house in August 1914. Erté decided to look to America, specifically to the magazines Harper’s Bazar and Vogue. Not knowing which of the two to approach, the artist tossed a coin in order to decide to whom he should send samples of his work. Erté’s debut with Harper’s Bazar followed shortly thereafter, in January 1915, and he was to remain closely associated with the magazine until 1936, producing numerous covers and illustrations. For a period of about six months in 1916, Erté worked for both Harper’s Bazar and Vogue, but the owner of the former, William Randolph Hearst, soon offered the artist an exclusive contract. As an editorial in a 1917 issue of Harper’s Bazar noted, ‘To glance at an Erté drawing is amusing. To look at one is interesting. To study one is absorbing. That any human being can conceive – and execute – such exquisite detail is positively miraculous.’ By the 1920s, largely as a result of his work for Harper’s Bazar, Erté was famous in America. His work for the magazine marked the beginning of an aesthetic that would be the soul of Harper’s Bazar (‘Bazaar’ from 1929 onwards) throughout the 1920s and 1930s. For those two decades, almost every issue of Harper’s Bazaar included a striking cover illustration by the artist. Throughout his twenty-two year engagement with Harper’s, Erté contributed to 265 issues of the magazine, including 240 covers and over 2,500 drawings, including his own fashion designs, as well as sketches of accessories, shoes, stage costumes and interior design, in addition to writing fashion pieces and a society column. As the magazine’s owner and publisher Hearst one day admitted, ‘What would Harper’s Bazaar have been if it wasn’t for Erté?’ Erté designed sets and costumes for several thearical productions in Paris and on Broadway, and in 1925 he made his first visit to the United States, having earned a six-month contract with Metro-Goldwyn-Mayer Studios in Hollywood. He was to remain in America for a year, during which he held his first ever exhibition, at the Madison Hotel in New York. This was followed in 1926 by an exhibition at Galerie Charpentier in Paris, where his work was first purchased by the State. Although his fashion work lessened after the 1930s, his designs for the theatre continued to be in great demand. Although perhaps best known for his magazine illustrations and covers, as well as his enormous influence on Art Deco graphics, Erté was also a successful and highly inventive fashion designer, creating several collections for such large American stores as Henri Bendel and B. Altman and Company. He was instrumental in developing the style now known as ‘unisex’, and invented the asymmetric décolletage. As one writer has noted of Erté, ‘the clothes he designed, from ball gowns to sports clothes for horseback riding, shooting or skiing – even his bathing suits – had a patina of the theatrical. His designs were like the stuff of dreams and called for the most luxurious fabrics, opulent furs and jewelry set with the finest stones.’ Although very few of Erté’s dresses survive today, the designs live on in the many thousands of sketches he made of them, for the pages of Harper’s and elsewhere. Erté’s reputation was was reborn with the Art Deco revival of the 1960s, and exhibitions of his work were held throughout Europe and America. In 1975 he published an autobiography, entitled Things I Remember, followed in 1989 by another, My Life / My Art. The artist lived and worked continuously until the age of ninety-seven, with a career that spanned some seventy-five years and produced over twenty thousand drawings and designs. As he once claimed, ‘Monotony engenders boredom and I have never been bored in my life.’