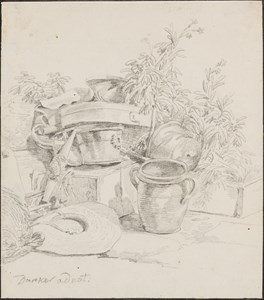 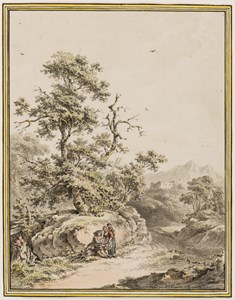 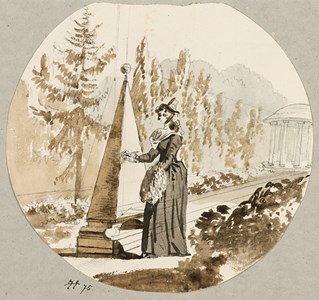 A friend and pupil of Jacob Phillip Hackert, the German landscape painter and etcher Balthasar Anton Dunker (sometimes Duncker) studied in Paris with Joseph-Marie Vien and Noël Hallé, and was also much influenced by the German printmaker resident in Paris, Johann Georg Wille. Dunker began his career as a reproductive etcher, receiving commissions from the print publisher Gabriel Huquier, and his etchings after the paintings in the collection of the Duc de Choiseul, executed between 1770 and 1771, may be regarded as his first significant works. From 1773, Dunker lived and worked in Bern in Switzerland, producing views of Swiss landscapes, often in collaboration with the Swiss artists Sigmund Freudenberger and Johann Ludwig Aberli, as well as genre pictures, portraits and historical subjects. Dunkrer is perhaps better known today as a printmaker than as a painter, and his etchings and engravings are characterized by a level of detail and imaginative compositions. He also produced vignettes and book illustrations for such works as Louis-Sébastien Mercier’s Tableau de Paris, published in 1787, and wrote a number of satirical texts, often illustrated by the artist and published anonymously. An outspoken opponent of the French Revolution, Dunker wrote and published a number of anti-revolutionary texts between 1798 and 1800, and also drew political caricatures. Dunker died in poverty in Bern in 1807. His son, Philipp Heinrich Dunker (1781-1836) was active as a landscape painter and printmaker in Nuremberg.