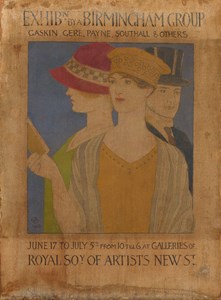 Born into a Quaker family, as a young boy Joseph Southall was taught watercolour painting at school in York by Edwin Moore, the brother of the artists Albert and Henry Moore. In 1878, at the age of seventeen, he left school and was apprenticed at a Birmingham architectural firm, while continuing to take evening classes at the city’s School of Art. After coming of age, Southall chose to abandon his architectural training to take up painting and sculpture, inspired by his reading of the works of John Ruskin and supported by a modest inheritance from his father and an uncle. A two-month trip to Italy in 1883, and his discovery of Quattrocento painting, inspired him to learn the largely forgotten technique of painting in egg tempera. As one recent scholar has noted of Southall, ‘Tempera was not fashionable when he began his experiments, and never really became so…In choosing it, Southall put himself apart from the main stream of worldly habits, away from the vanity and superfluity of the art world.’ Southall continued his studies at the Birmingham School of Art, where he met the artist Arthur Gaskin, who was to become a lifelong friend and confidant. In 1901 he was one of the founder-members of the Society of Painters in Tempera, along with Maxwell Armfield, Walter Crane, Roger Fry, William Holman Hunt and George Frederic Watts. Of these, Southall had perhaps been using the technique the longest, and he continued to do so throughout his career. Among his easel pictures were mythological, romantic, literary and religious subjects, portraits, landscapes and seascapes, while he also received a handful of commissions for mural and fresco decorations. A one-man show at the Galerie Georges Petit in Paris in 1910 was a huge success, with over eight hundred pounds worth of pictures sold and several commissions received. Although Southall’s work as a painter, characterized by a brilliant technique and precise draughtsmanship, was admired by such artists as Edward Burne-Jones (who was something of a mentor to Southall, and a champion of his work) and even Pablo Picasso, by the time of his death in 1944 he had been almost completely forgotten. A memorial retrospective exhibition of his work was held in Birmingham and London in 1945.