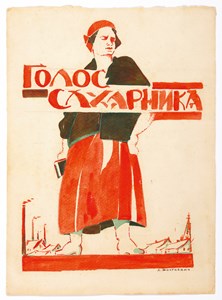 Born in 1900 in the Ukraine, Lidia Zholtkevich was the daughter of the Revolutionary sculptor A. F. Zholtkevich, who lived in Paris between 1908 and 1917. The young Zholtkevich began her artistic training while living in Paris, first exhibiting her drawings in 1914 and the following year entering the private Académie Colarossi. On a par with the famed Académie Julian, the Colarossi school was known for accepting female students and allowing them to conduct life drawing from the posed male nude. In 1917 Zholtkevich returned to Russia with her family, and later enrolled at the Vkhutemas art and technical school in Moscow. With a curriculum similar to that of the Bauhaus, Vkhutemas (an acronym for Vysshiye Khudozhestvenno-Tekhnicheskiye Masterskiye, or ‘Higher Art and Technical Studios’) was established in Moscow in 1920 as, in the words of one scholar, ‘a specialized institution that would prepare qualified master artists, professors, and directors to work in both industry and higher education. It aimed to fulfill the state’s goals for efficiency and production by linking art with politics.’ Zholtkevich entered the school shortly after Alexander Rodchenko had joined the faculty of Vkhutemas, which coincided with the period when Rodchenko was moving away from abstract painting towards the Russian avant-garde movement to be known as Constructivism, characterised by bold colours, simple typefaces, and geometric shapes and compositions. The professors of Vkhutemas, mainly leftist artists, led the development of agitational art and propaganda, with the first works of the movement appearing soon after the Revolution of 1917. Other influential instructors during Zholtkevich’s time at Vkhutemas were the painter and designer Lyubov Popova and architect A. A. Vesnin. Zholtevich completed her studies in 1929, graduating with a specialty in woodcut prints. Shortly thereafter, between 1930 and 1931, she accompanied her former classmate, the Belarussian painter Meir Axelrod, on an excursion to Crimea as part of the first Five Year Plan, to create an artistic record of agricultural achievements in collectivisation. During her time at Vkhutemas, Zholtkevich began exhibiting with the Association of Graphic Artists at the House of Printing, and in the 1930s she received several official commissions. Her most substantial work for the government was producing designs for silk-screened panels on behalf of the People’s Commissariat for Food Industry for the Soviet pavilions at the International Exhibitions in Paris in 1937 and New York in 1939.