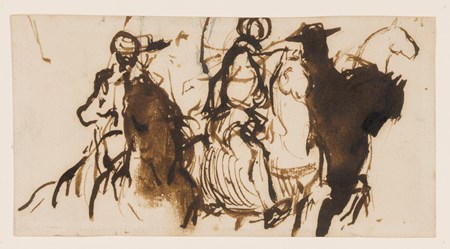 The French Orientalist painter Edme Alexis Alfred Dehodencq was a pupil of Léon Cogniet, entering the Ecole des Beaux-Arts in Paris in 1839. He made his Salon debut five years later. In 1849 he travelled to Spain, where he spent five years, producing paintings and drawings of scenes from Spanish life. In 1854 Dehodencq visited Morocco for the first time. He became the first Western artist to work extensively in the country, and divided his time between Cadiz and Tangiers until his return to France in 1863. A number of his genre scenes, depicting life in the Arab and Jewish communities of Morocco, were sent to Paris for exhibition at the Salons. After his early successes, however, Dehodencq died in obscurity. He left a large group of drawings, many of which are now in the Louvre and the Musée des Beaux-Arts in Lille, while others are in the collection of the Israel Museum in Jerusalem.