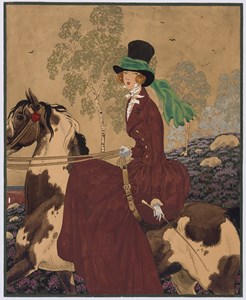 A leading illustrator of the Art Deco period in France, Pierre Brissaud was born into an artistic milieu. His elder brother Jacques was active as a portrait and genre painter, while his uncle Maurice Boutet de Monvel was a well-known illustrator, as was his first cousin Bernard Boutet de Monvel, who was also noted for his fashionable portraits. Brissaud studied at the Ecole des Beaux-Arts in Paris, as well as at the art school in Montmartre established in the 1880s by Fernand Cormon, where such artists as Louis Anquetin, Emile Bernard, Henri Matisse, Henri de Toulouse-Lautrec, François Picabia and Vincent Van Gogh had also studied. It was as a student at the Atelier Cormon that Brissaud met fellow artists and illustrators Georges Lepape, Charles Martin and André-Edouard Marty. In 1914, the American edition of Vogue magazine published an article, under the title ‘Beau Brummels of the Brush’, lauding a group of French fashion illustrators - including Brissaud, George Barbier, Paul Iribe, Lepape, Martin and Bernard Boutet de Monvel - whom they named ‘The Knights of the Bracelet’. As the article further noted, ‘The artist has discovered the couturier, and vice versa, and they find that they were not so very far apart after all; one uses paints as a medium and the other silks and satins.’ Brissaud became known in particular for his pochoirs and fashion illustrations for the magazine Gazette du Bon Ton. First published in 1912, the Gazette du Bon Ton was an illustrated monthly magazine devoted to fashion, elegance and art, and among other artists who produced illustrations for the magazine were Barbier, Boutet de Monvel, Lepape, Marty and Martin. Brissaud’s illustrations appeared in Vogue after it acquired the Gazette du Bon Ton in 1925, as well as in the American magazines Vogue, House & Garden and Fortune. Brissaud also provided illustrations for editions of several books, notably the Abbé Prevost’s Manon Lescaut, Honoré de Balzac’s Le père Goriot, Gustave Flaubert’s Madame Bovary and Edmond Rostand’s Cyrano de Bergerac.