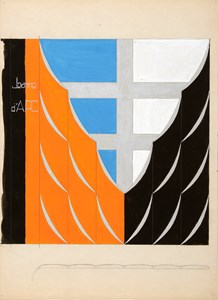 With a career that spanned fifty years, Paul Bonet’s work as a decorative bookbinder encompassed most of the artistic trends in France in the 20th century, including Art Nouveau, Art Deco, Cubism, Surrealism and Abstraction. Of Belgian parentage, Bonet worked as an apprentice in an electrical shop but harboured ambitions to be an artist. His father refused to let him enrol at the Académie Julian, however, and he instead worked as a modeller of wooden fashion mannequins. His earliest work as a bookbinder was in 1920 and the practice remained something of a hobby for him until 1924, when he showed some of his designs to Henri Clouzot, the curator at the Musée Galliera, who was organizing the exhibition L’art du Livre Français for the following year. A number of Bonet’s designs were included in the exhibition, while in the same year others were shown at the Salon d’Automne. The critical success of these works encouraged Bonet to become a professional designer of bookbindings. He made his debut at the Salon of the Société des Artistes Décorateurs in 1926, and soon gained a major patron in a Parisian bibliophile and collector called R. Marty. When Marty was forced to sell his collection at auction in 1930, it included fifty-two Art Deco bindings by Bonet, which caused a sensation. A second major client was an Argentine collector of bindings, Carlos Scherrer, who commissioned most of Bonet’s major works of the 1930s, while the artist also worked for the Belgian collector René Gaffe. Known for his radical designs and the use of new techniques and materials (including nickel, steel, gold and duralumin) in his leather bindings, which were executed by expert artisans from his designs, Bonet dominated the field of bookbinding in the 1930s, though his output suffered during the economic recession of 1933-1935. However, commissions rebounded after his work was shown at the seminal Exposition Internationale des Arts et Techniques dans la Vie Moderne in Paris in 1937. A monograph devoted to Bonet was published in 1943, and his reputation continued to grow after the War. Bonet often bound the same book title in several unique and innovative ways, for different clients. As a contemporary scholar noted of him, ‘He stood before the complete work each time as though it were a newly discovered book; he studied it anew, and each time he found in the work he had already bound, five, ten, fifteen times, a new emotion, a virgin idea, an unused decorative commentary. His is an extraordinary, magnificent fanaticism. Only a passionately enthusiastic book-binder and book designer could conceive of and reach that absolute. Only an artist so richly endowed with creative imagination could treat over and over again, without fatigue or boredom or repetition, the same problems constantly reappearing…When Bonet refused (as he often did) to repeat a binding, he was no doubt refusing the easy solution...’1