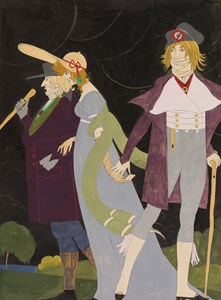 A pupil of Fernand Cormon at the Ecole des Beaux-Arts, where he met Georges Lepape and André Marty, Paul Allier was active mainly as a fashion illustrator. He worked for such magazines as L’Assiette au Beurre, Femina, Flirt, Le Jardin des Modes and Vogue, and also produced book illustrations and theatre designs. Allier was also known for his design of a number of highly refined, hand-coloured stencil prints known as pochoirs, often published in collaboration with the Galerie Lutetia in Paris. These pochoirs were often issued in thematic series, such as The Harem series, published in 1926, or The Seasons, which appeared in 1928. Each image signed by the artist and individually numbered, Allier’s pochoirs were issued in limited editions and came to be much prized by collectors.