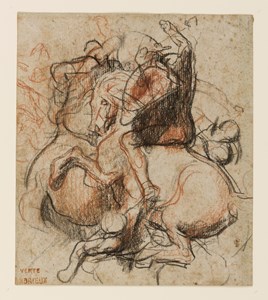 A painter, draughtsman and engraver of Belgian descent, Clément-Auguste Andrieux studied in Liège between 1862 and 1866 and then in Paris, entering the studio of William-Adolphe Bouguereau in 1867. He made a particular specialty of battle scenes, notably episodes from the Franco-Prussian war, the Crimean War and Napoleonic campaigns. He achieved a measure of success early in his career, when one of his first exhibited works, a painting of The Capture of Sebastopol, was purchased by an English museum. Andrieux exhibited at the Salons in Paris from 1850 until his death, and also published a number of lithographs and engravings, including a set of thirty scenes illustrating the siege of Paris during the Franco-Prussian war of 1870-1871. Other episodes from the Franco-Prussian war by Andrieux were published in Le Monde illustré. Andrieux was also highly regarded as an illustrator and was an accomplished watercolourist. His death in 1880, at the age of fifty, left a young son, for whose benefit an auction of the contents of his studio was held the following year. The posthumous vente Andrieux included several mixed lots containing a total of over 1,600 drawings and sketches by the artist, including the present sheet. Paintings by Andrieux are today in museums in Brussels, Liège and Tournai, while large groups of drawings and watercolours by the artist are in the museums of Perpignan and Poitiers.