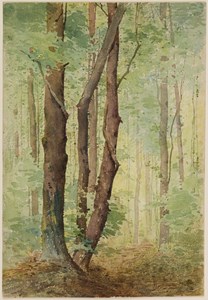 A student of Philippe Zacharie at the Ecole des Beaux-Arts in Rouen, Henri Adam was an amateur artist who worked by day in a bank in Rouen, and it was not until he was forty-five that he was able to devote himself full time to painting. He remains an obscure figure, however, and very little is known of his career. Adam was employed as a professor of drawing at the Collège de Normandie, and painted views along the coast between Brittany and Ostend in Belgium. Two watercolour views of Rouen by the artist are today in the collection of the Musée des Beaux-Arts in Rouen.