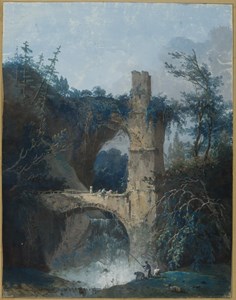 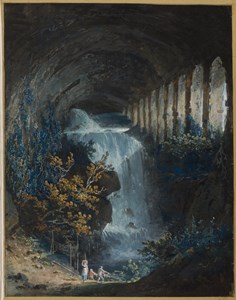 Born in Paris in 1774, very little is known about the life and work of French artist Chipart, including his first name, and he remains a mysterious figure today. He seems to have worked outside France for most of his career, and was in particular active for several years as a scenographer, costume designer and painter of theatrical scenery at the Royal Danish Theatre in Copenhagen, between c.1794 and c.1825. Chipart also appears to have travelled through Russia, Sweden, England and Germany, where he is thought to have lived for some time in Hamburg. Three gouache landscape drawings by Chipart, one of which is dated 1801, are today in the collection of the Statens Museum for Kunst in Copenhagen, while another example, a Landscape with Ruins, is in the Nasjonalmuseet in Oslo.