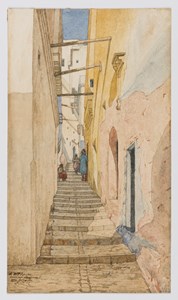 The architect Albert Ballu entered the Ecole des Beaux-Arts in Paris in 1868, and there studied under both Auguste Magne and his father, Théodore. A well-known architect, Théodore Ballu designed several churches in Paris, including La Trinité, Saint-Ambroise and Saint-Joseph, and in addition oversaw the reconstruction of the Hôtel de Ville. Much like his father, Albert Ballu was involved in the design and execution of countless buildings. In 1876 he designed the Faculty of Medicine and Pharmacy in Bordeaux. He also competed for the reconstruction of the Sorbonne in 1889, but was unsuccessful, taking third place. The work Ballu completed in France accounts for only one part of his overall career. During the 1880s, he travelled to Algeria under the employ of the Church, by whom he was charged with the restoration of religious buildings in the French colony. During this period he carried out an extensive survey of local architecture. In 1889, Ballu succeeded Edmond Duthoit as the chief architect of the historical monuments department in Algiers, a post he would hold for the next thirty years, during which he oversaw and documented the excavations of numerous Roman ruins, notably the ancient cities of Djémila and Timgad. He also designed the railway station and cathedral in Oran. Alongside this work, Ballu was tasked with designing the Algerian pavilions for the Paris Expositions of 1889 and 1900, which included a reproduction of an Algerian town.