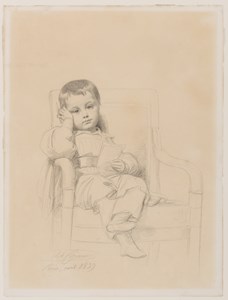 A pupil of Fleury-Richard at the Ecole des Beaux-Arts in Lyon in 1820, Sébastian-Melchior Cornu later studied with Claude Bonnefond in Lyon and Jean-Auguste Dominique Ingres in Paris. Excused from military service in 1824 on account of a malformed foot, Cornu was by 1828 in Italy, where he worked with Charles Gleyre. He remained in Rome for seven years, and also visited the Near East. Soon after he returned to France (bearing a letter of recommendation from Ingres, who had just been appointed the director of the French Academy in Rome), Cornu had established a reputation as a painter of religious works, both as easel pictures and in the form of large-scale decorations for churches. In his work can be seen the influence of, on one hand, Italian art and on the other, the example of Ingres and such followers as Hippolyte Flandrin. Cornu worked in several Parisian churches between 1850 and 1870, including Saint-Merri, Saint-Louis-d’Antin and Saint-Séverin, and exhibited regularly at the Salons in Paris and Lyon, where he showed portraits, historical and literary subjects, and genre and Orientalist scenes. Paintings by Sébastien Cornu are in the museums of Besançon, Grenoble, Lyon and Semur-en-Auxois, as well as in the Louvre and the Musée Carnavalet in Paris and the chateaux of Compiègne and Versailles. A group of drawings by Cornu is in the collection of the Musée des Beaux-Arts et d’Archéologie in Besançon, presented to the museum by the artist’s widow, Hortense Lacroix, in 1875.