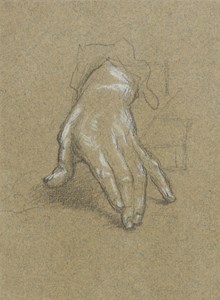 A painter, printmaker and writer, Marcellin Gilbert Desboutin was born into a wealthy family, and for the first part of his life enjoyed a comfortable existence. Giving up a career in law in favour of becoming an artist, in 1845 he entered the Ecole des Beaux-Arts, where he studied first with the sculptor Louis-Jules Etex and later with the painter Thomas Couture. In 1854, after several years of travelling in England and the Low Countries, Desboutin and his family settled in Italy, where he bought the Villa dell’Ombrellino at Bellosguardo, overlooking Florence. He was to live there for the next seventeen years, enjoying a luxurious lifestyle and amassing a collection of paintings and furniture, as well as writing plays. The Villa dell’Ombrellino hosted numerous artists and writers visiting from France, while Desboutin also befriended several Italian artists, including Giuseppe de Nittis, Telemaco Signorini and Giovanni Boldini, who painted his portrait. The collapse of his family’s fortunes in the early 1870s led to a sudden change in Desboutin’s lifestyle, and he was forced to abandon the Villa dell’Ombrellino in 1871 and leave Italy. He was back in Paris by 1873, living poorly in a small apartment and attempting to make a living from his art. As Amy Marquis has recently described the artist, he was ‘a sociable man who frequented the most popular salons and cafés in Paris and developed lifelong friendships that placed him at the heart of literary and artistic circles…Desboutin was an engaging character and as a bon vivant who fell on hard times, he became the archetype of the bohemian artist.’ Desboutin sent paintings and etchings to the Salons, winning prizes in 1879 and 1889, and also took part in the second Impressionist exhibition in 1876. For many years, he was at the centre of a group of artists and writers who met regularly at the Café Guerbois, and later at the Café de la Nouvelle Athènes. When his young son became ill in 1880, Desboutin moved to the South of France, living in Nice for eight years and painting a number of portraits of wealthy patrons on the Côte d’Azur. On his return to Paris he enjoyed his most productive years as a painter, although in 1896 he decided to return to Nice for good. Desboutin was a founder member of the Société Nationale des Beaux-Arts in 1890, where he exhibited regularly until his death in 1902. A close friend of Edgar Degas, for whom he posed for the painting L’Absinthe of 1876, like him Desboutin was a gifted printmaker. A member of the Société des Aquafortistes, he was known especially for his portraits in drypoint of some of the leading cultural figures of the day, which were printed in small editions and sold for between one and two hundred francs apiece.