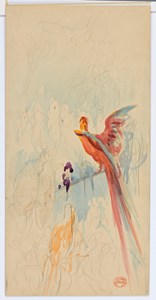 Born in Alsace and arguably the most widely-known French artist of the 19th Century, Gustave Doré was immensely prolific as a draughtsman, printmaker, watercolourist and illustrator. A precocious artist, he produced his first lithograph at the age of eleven, and his first album of lithographs, Les travaux d’Hercule, four years later. It was also at the age of fifteen that Doré settled in Paris, having gained employment as a caricaturist for the newly-founded Journal pour rire, while continuing his studies at the Lycée Charlemagne. By the middle of the 1850s he was working extensively as an illustrator, producing highly inventive and original wood engravings to accompany editions of such novels as François Rabelais’s Gargantua and Pantagruel and Honoré de Balzacs Contes drolatiques. Yet despite his renown as a book illustrator, which brought him considerable wealth and fame, Doré always wanted to be recognized as a painter. Although he was a regular exhibitor at the Salons, his paintings never achieved much critical success, at least in France. In England, however, where he began to establish close ties in the 1860s, his work as a painter was much more highly regarded, and among the collectors of his work was Queen Victoria. Several of the artist’s large Biblical paintings were exhibited in London, mainly at the Doré Gallery on New Bond Street, which opened in 1869 and continued to show his work to the paying public until 1892, long after his death. An accomplished watercolourist, Doré began working extensively in the medium in 1873, and exhibited several works at the Société d’Aquarellistes Français in 1879, 1880 and 1882. He was also active as a sculptor, most notably with a statue of the writer Alexandre Dumas, completed in 1881, but it is for his accomplishments as a book artist - with an oeuvre of nearly 10,000 illustrations - that he remains best known and most admired today.