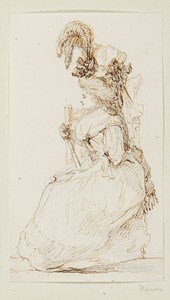 The most powerful administrator of the arts in Napoleonic France, Dominique-Vivant Denon had an extraordinary life and career. A diplomat, writer, archaeologist and engraver, he was also a discerning and wide-ranging art collector and a prolific and talented draughtsman. As a law student in Paris, Denon was introduced into the circle of the collector and anti¬quarian, the Comte de Caylus, and eventually attracted the attention of Louis XVI him¬self, who named him gentilhomme ordinaire de la chambre du Roi. In 1772 Denon entered the diplomatic service, and six years later was sent to Naples, where he spent seven years as chargé d'affaires from 1778 to 1785. He studied the excavations at Pompeii and Herculaneum and was commissioned to contribute text to the Abbé de Saint-Non's Voyages pittoresques de Naples et de Sicile. In March 1787 he was accepted into the Académie Roy¬ale as an engraver. The following year he sold his collection of Etruscan vases to the King and departed for Italy, where he spent the early years of the Revolution. At the end of 1793 he made a sudden return to France to avoid having his properties confiscated. His presence in Paris put him at great risk, motivating him to change the spelling of his family name from the aristocratic 'de Non' to 'Denon'. He owed his survival to the artist Jacques-Louis David, who issued a certificate testifying to Denon’s republican patriotism and procuring for him several etching commissions. Denon also began to attend the trials and debates of the various revolutionary committees, where he made quick sketches, like a courtroom reporter, of many of the significant figures of the Revolution. After the Terror, Denon was enlisted by General Bonaparte to accompany the Egyptian expedition of 1798-1799. He meticulously measured and drew many of the monuments of Egypt, and on his return to France published the first work of scientific Egyptology, the Voyages dans la haute et basse Egypte, which appeared in 1802. The same year, with the inauguration of the Musée Napoléon (later the Louvre), the recently ennobled Baron Denon was appointed its first Director, as well as directeur général des Musées Impériaux. This gave him full control over the Manufactories of Sèvres, Gobelins and Savonnerie as well as the Monnaie. He reorganized the Louvre, guided Napoleon in the selection of works to be seized from conquered nations, and presided over the official Salons until the fall of Bonaparte in 1814.