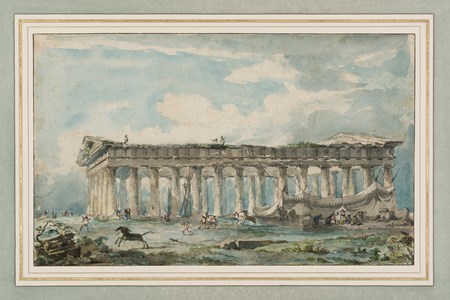 Following an apprenticeship with Charles-Nicolas Cochin, Louis-Jean Desprez was admitted into the Académie Royale d’Architecture in Paris in 1765. He frequently entered the architectural competitions held at the Académie, submitting large, highly finished pen drawings. While he studied architecture for several years, he also took up studies in drawing and engraving, eventually being appointed a Professor of Drawing at the Ecole Royale Militaire. Desprez was to spend almost all of his independent career outside France, however. In 1776 he won the Prix de Rome in the field of architecture, although soon after his arrival in Italy he seems to have finally abandoned the study of architecture in favour of landscape drawing. This was perhaps inspired by the fact that in 1777 he was commissioned by the Abbé de Saint-Non to produce illustrations for the Voyage pittoresque, ou description des royaumes de Naples et de Sicile, published in five volumes between 1781 and 1786. Together with Claude-Louis Châtelet and Dominique-Vivant Denon, Desprez spent just over a year travelling throughout southern Italy, making numerous topographical drawings which, on his return to Rome in 1779, he often adapted as designs for engravings. After more than four years in Rome, Desprez was summoned to Sweden in 1784 by King Gustav III, who engaged him on the design of theatrical decorations for the new Royal Opera House in Stockholm. He worked in Sweden for the rest of his career, obtaining the position of court architect and scenographer, and producing numerous stage designs for the theatres at Drottningholm and elsewhere. Buoyed by the patronage of the King, who shared with the artist a love of the theatre, Desprez enjoyed a position of some importance in Swedish artistic circles. Following the assassination of Gustav III in 1792, however, his star faded. In the hope of finding a new patron responsive to his ambitious vision, he made several drawings for the Empress Catherine II of Russia but was unsuccessful in gaining her support. He eventually died in poverty and obscurity in Stockholm. Desprez’s watercolour drawings, sometimes of a considerable scale, reveal an artist fascinated with the dramatic possibilities of a scene. (Indeed, it was just this ability and vision that made him such a success as a theatrical designer.) Much of his surviving work as a draughtsman is today to be found in Swedish collections. The largest extant group of drawings by Desprez is today in the Nationalmuseum in Stockholm, while a significant number of theatrical designs by the artist are in the collection of the Teatermuseum at Drottningholm.