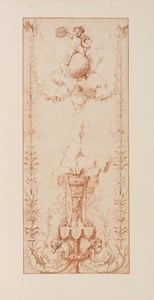 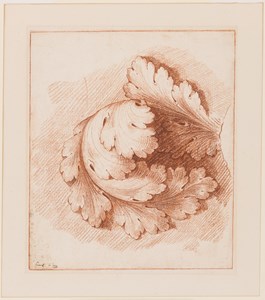 The sculptor, architect, engraver and ornamental designer Gilles-Paul Cauvet was admitted to the Académie de Saint Luc in 1762, and four years later was named Director of the institution. In 1775 he was appointed official sculptor to ‘Monsieur’, the Comte de Provence and brother of Louis XVI. Cauvet was particularly known and regarded for his interior decorations, as well as for his designs for boiseries, furniture, clocks and gilt bronze ornaments for such clients as the Queen, Marie-Antoinette. Appointed sculpteur des bâtiments du roi, Cauvet worked at the Palais-Royal, the Luxembourg Palace and the Opéra at Versailles. He often collaborated with the architects Alexandre-Théodore Brogniart and Etienne-Louis Boullée, decorating the interiors of many private hôtels particuliers in Paris, notably the hôtels de Noailles, Kinski, de Mazarin, de Mailly-Nesle and du Nivernais. In the 1780s Cauvet worked on the design of several public buildings in his hometown of Aix-en-Provence and in nearby Marseille. At a time, in the third quarter of the 18th century, when sculpture and relief work in wood or stucco began to dominate the field of interior decoration, where previously painted decorative schemes had prevailed, Cauvet’s distinctive style, with its use of motifs such as acanthus leaves, scrolls and so forth, was characterized by a particular lightness and elegance. In March 1789, the year after Cauvet’s death, much of the contents of his atelier were dispersed at auction, although some works remained in the family and passed to his granddaughter, Henriette Hélix Cauvet, Mme. Ernest Lefevre, and were in turn sold at auction in Paris in 1883. Cauvet’s drawings are quite rare, although important groups of ornamental drawings by the artist are in the Kunstbibliothek in Berlin, the Hermitage in Saint Petersburg and the Rothschild Collection at Waddesdon Manor in Aylesbury, Buckinghamshire. The collection of the Metropolitan Museum of Art in New York includes an album of some fifty designs by the artist for fountains, arabesques, furniture and silverware, while other decorative drawings by Cauvet are in the Ecole des Beaux-Arts and the Musée des Arts Décoratifs in Paris, the Musée des Beaux-Arts in Lille, and the Cooper-Hewitt National Design Museum and Pierpont Morgan Library in New York.