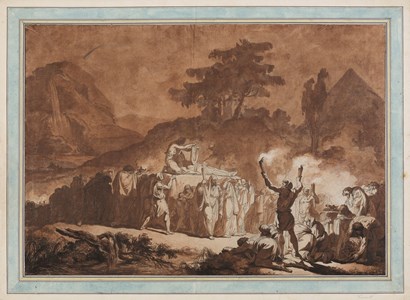 The son of a Protestant painter from Geneva who had settled in Paris in 1745, François-Andre Vincent became a pupil of Joseph-Marie Vien around 1760. He studied at the Académie Royale and won the Prix de Rome in 1768, spending three years at the Ecole Royale des Elèves Protégés before travelling to Rome in 1771. He lived and worked as a pensionnaire at the Académie de France for four years, during which he accompanied Jean-Honoré Fragonard and the financier Pierre-Jacques-Onésyme Bergeret de Grancourt on a trip to Naples. He produced a large variety of drawings in Italy, including landscapes, studies of peasant types and caricatures. He returned to France in 1775 and in 1777 exhibited an important group of fifteen paintings at the Salon, including a portrait of Bergeret painted in Rome three years previously. His first great success, however, came at the Salon of 1779, where he exhibited a scene from modern French history, 'President Molé and the Insurgents'. By the time of his acceptance into the Académie in 1782, Vincent had established a reputation as one of the leading history painters in Paris. He participated regularly at the Salons, although many of the paintings and drawings he exhibited there have since been lost. Between 1783 and 1785 he designed a series of Gobelins tapestries depicting scenes from the life of Henry IV, while the 1790s found him painting a number of fine portraits. Vincent became a member of the Institut in 1795, and in 1800 married the portrait painter Adélaïde Labille-Guiard, although she died just three years later. Commissioned by Napoleon in 1800 to paint an enormous canvas depicting The Battle of the Pyramids, Vincent dedicated most of his energies over the next six years to completing the project, although ill health prevented him from doing so. In the last years of his career he began losing his sight and devoted most of his time to portraits and drawings. Vincent was a brilliant and versatile draughtsman, and produced a large number of drawings, ranging from landscapes, history subjects and copies after the antique to head studies and caricatures of his fellow artists. His early style as a draughtsman, particularly during his years as a pensionnaire in Rome, often comes close to that of Fragonard, with whom his drawings have at times been confused, while his later drawings tend towards Neoclassicism and Romanticism. Indeed, the fact that Vincent worked in a range of disparate styles and techniques throughout his career has meant that drawings by him have often borne attributions to artists as diverse as Fragonard, Jacques-Louis David and Théodore Gericault.