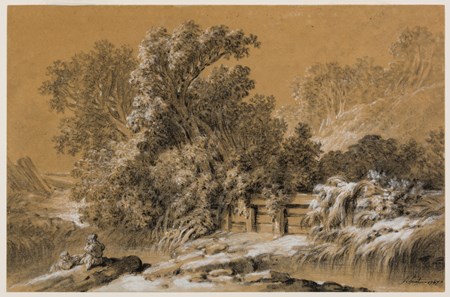 Born into a family of artists, Jean-Baptiste Huet was the son and pupil of the animalier painter Nicolas Huet the Elder. He also studied with another animal painter, Charles Dagomer, before entering the studio of Jean-Baptiste Le Prince. In 1769 he was accepted into the Académie Royale as a ‘peintre d’animaux and the following year made his debut at the Salon, where his paintings of animals, indebted to the example of Jean-Baptiste Oudry, were much admired by critics. Huet regularly exhibited drawings of animals at the Salons until 1787, and again between 1800 and 1802. He also had a particular fondness for pastoral and bucolic genre subjects, often with shepherds or herders, in which the influence of François Boucher is readily evident, while Huet also found inspiration in the work of the Dutch genre painters of the 17th century. In 1794 he was appointed peintre du roi, and in addition produced designs for the Gobelins and Beauvais tapestry factories and for printed textiles at the Manufacture Oberkampf in Jouy-en-Josas. Huet was an extremely accomplished draughtsman, and many of his drawings were reproduced as engravings, usually by the printmaker Gilles Demarteau the Elder. Between 1765 and 1770 he painted a series of pastoral landscapes and animal subjects to decorate the interior of Demarteau’s house in Paris, a project to which both Boucher and Jean-Honoré Fragonard also contributed. He also produced a large number of book illustrations. Huet assembled a personal collection of drawings by artists such as his teacher Le Prince, as well as works by Boucher, Hubert Robert and Jean-Honoré Fragonard, alongside prints by Northern artists such as Nicolas Berchem, Paulus Potter and Philips Wouwerman; all of whom can be seen to have had an influence on his own work. His son and pupil, Nicolas Huet the Younger, enjoyed a successful career as a natural history draughtsman and engraver.