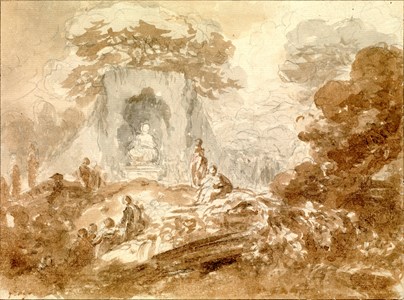 Jean-Honoré Fragonard was a pupil of Jean-Baptiste Chardin and François Boucher, whose studio he entered around 1749. Although he only remained in Boucher’s studio for about a year, he continued to assist the elder artist on large-scale works for some time thereafter. After winning the Prix de Rome in 1752, Fragonard studied under Carle Vanloo at the Ecole Royale des Elèves Protégés before arriving in Rome in 1756. While a pensionnaire at the French Academy in Rome, Fragonard made numerous drawings after ancient sculpture and paintings by Italian artists, as well as a series of superb landscape drawings, in which he was encouraged by Charles-Joseph Natoire, the director of the French Academy. On his return to France in 1761, Fragonard was agrée at the Académie Royale with a large history painting of Coresus and Callirhoe, but he was never appointed a full Academician. Rejecting the practice of history painting, he turned his attention instead to genre and landscape painting, choosing not to exhibit at the official Salons. Among his finest works were a series of large mural paintings of The Progress of Love, painted between 1770 and 1773 for Madame du Barry at Louveciennes and today in the Frick Collection in New York. Following the completion of the series, Fragonard made a second trip to Italy, in the company of the financier Pierre-Jacques Bergeret de Grancourt. In the late 1770s, to compensate for a lack of painting commissions brought about by a change in taste in favour of Neoclassicism, Fragonard began to turn his considerable talents towards book illustration. From the 1790s onwards, he painted very little, although he continued to draw. His only pupils were his son, Alexandre-Evariste Fragonard, and his sister-in-law, Marguerite Gerard. Fragonard was among the most gifted draughtsmen of the 18th century in France. He drew in a variety of media, using pen and ink, red or black chalk or brush and wash with equal freedom and complete assurance. It is often difficult to securely date his drawings, as few are dated and only rarely can they be specifically connected with his paintings.