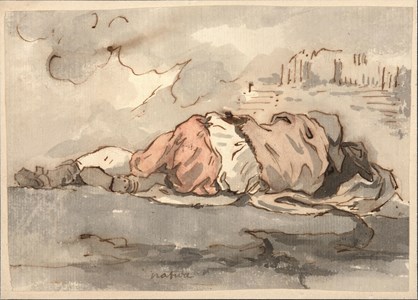 Born into a family of sculptors in wood, Augustin Pajou entered the studio of the sculptor Jean-Baptiste Lemoyne at the age of fourteen. He won the Prix de Rome in 1748, spending a few years at the Ecole des Elèves Protegés before taking up his place at the French Academy in Rome in 1752. Agrée at the Académie Royale in 1759 and reçu the following year, at the age of thirty, Pajou produced portrait busts, religious sculptures and funerary monuments, as well as small-scale terracotta statuettes and reliefs for collectors. Among his public commissions were decorative reliefs for the Palais-Royal in Paris and the Royal opera house at Versailles, as well as sculptures and reliefs for the Parisian church of Saint-Roch and the cathedral of Sainte-Croix in Orléans. A gifted teacher, he was appointed an assistant professor of sculpture at the Académie Royale in 1762 and a full professor in 1766. From 1744 Pajou earned a significant number of Royal commissions from the Comte d’Angiviller, director of the Bâtiments du Roi under Louis XVI. He was named garde des antiques du roi in 1777, but with the Revolution lost his lodgings at the Louvre. He spent the early 1790s in Montpellier and worked very little in the last decade or so of his life.