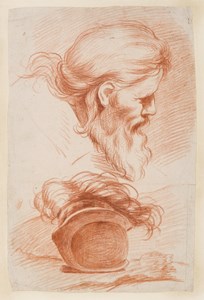 The son of a sculptor and the brother of an architect, Jacques (or Jean) Dumont first studied with the landscape painter Antoine Lebel. He seems to have received his nickname of ‘Dumont le Romain’ from the fact that, as a young art student, he is said to have walked from Paris to Rome, where he completed his studies over the next few years. During his five years in Rome he made drawings after the Antique as well as copies of paintings by such Italian artists as Benedetto Luti. Three years after his return to France in 1725, Dumont was received into the Académie Royale, having submitted as his reception piece a painting of Hercules and Omphale that is today in the Musée des Beaux-Arts in Tours. He exhibited at the Salons between 1737 and 1761, and taught at the Académie for many years, serving as professor and rector before eventually being named honorary director of the institution in 1768. Apparently a man of somewhat difficult temperament, Dumont was also briefly the first governor of the Ecole des Elèves Protégés in 1748, before being replaced, after a few months, by Carle Vanloo. Dumont worked as a history painter of Biblical subjects and mythological scenes, and also painted genre subjects and portraits. Among his significant public commissions were a painting of The Meeting of Saint Francis de Paul and Louis IX at the Château of Plessis-les-Tours for the church of the Pères Minimes in Paris in 1730, and a large allegorical canvas of The Signing of the Peace Treaty of Aix-la-Chapelle in 1748, painted in 1761 for the Hôtel de Ville in Paris and today in the Musée Carnavalet. In 1748 Dumont painted a series of overdoors of allegorical subjects for the Château de la Muette, today in the Louvre, and in 1752 he designed a set of tapestries on the theme of Samson for the Gobelins manufactory; a project that was eventually abandoned, although at least two preparatory drawings survive. Dumont rarely exhibited his work, although paintings by him were shown at the Salons between 1737 and 1761. Several years after Dumont’s death, the engraver, collector and biographer Jean-Baptiste-Denis Lempereur wrote somewhat disparagingly of him that ‘This artist was lacking in imagination; he could only compose with the help of prints…His drawing was mannered although fairly correct; he had some skill with the brush and a sort of colour. In spite of that, his paintings are affected by his lack of facility, and by the aversion that he felt all his life for work.’ Perhaps partly as a result of such criticism, Dumont’s relatively small oeuvre as a painter and draughtsman remains little studied today, by comparison with many of his contemporaries. As a draughtsman, Dumont displayed a distinct preference for red chalk, and produced several drawn copies after the work of Italian masters, as well as nude academies, studies of heads, and a handful of decorative designs. Drawings by the artist are in the collections of the Hessisches Landesmuseum in Darmstadt, the National Galleries of Scotland in Edinburgh, the Musée des Beaux-Arts in Nancy, the Pierpont Morgan Library and the Metropolitan Museum of Art in New York, the Ecole des Beaux-Arts and the Louvre in Paris, the Nationalmuseum in Stockholm, the Goethe-Nationalmuseum in Weimar, and elsewhere.