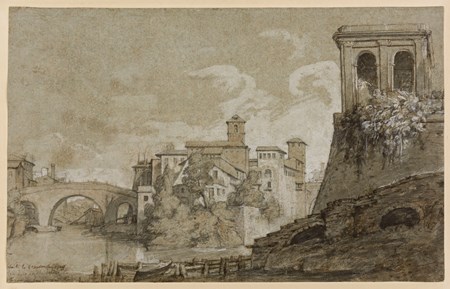 A history painter, portraitist and genre painter, Nicolas Delobel was a pupil of Louis de Boullongne, and won the second prize in the Prix de Rome competition in 1717. In 1723 he was selected, alongside Charles-Joseph Natoire and Edme Bouchardon, to be a pensionnaire at the Académie de France in Rome, then under the direction of Nicolas Vlueghels, who was to be a particular influence on the young artist. Among his fellow pupils were François Boucher and Etienne Jeaurat, as well as Bouchardon and Natoire. While in Rome, Delobel produced copies after Italian masters and a group of splendid landscape drawings of views of Rome and the surrounding countryside, probably inspired by Vlueghels, who once described himself, in a letter sent from Rome, as ‘amoureux des belles veües de ce pays’. Vlueghels made landscape studies and sketches en plein-air and encouraged his pupils to do the same; indeed, both Natoire and Jeaurat produced similar landscape drawings while studying in Rome. Delobel returned to France in 1730 and was agrée at the Académie Royale two years later, becoming a full Academician in 1734. He exhibited at the Salons between 1737 and 1753, making his debut with a sketch for a Royal commission; an allegorical painting of The Reunion of Lorraine and France. Named a peintre ordinaire du roi, he also worked at Versailles. Only a handful of paintings by Delobel are known today, however. Many of the works sent by him to the annual Salons have been lost, as has the painting of Hercules Between Virtue and Vice which served as the artist’s morceau de réception to the Académie in 1734. An altarpiece of The Marriage of Saint Cecilia is in the Parisian church of Saint-Eustache, while other paintings of religious subjects are in churches in Beauvais, Dammartin-en-Goële and Montreuil. Mythological and allegorical paintings by Delobel are today in the Musée Malraux in Le Havre and the Musée Lorrain in Nancy, as well as the Pavillon de Aurore in the Parc de Sceaux.