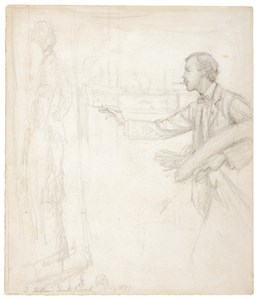 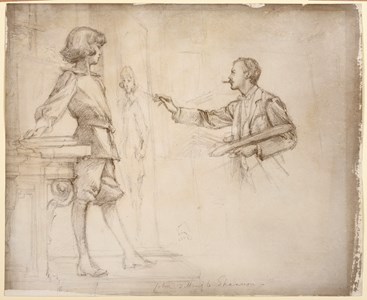 A gifted amateur artist, Marion Margaret Violet Manners was born into an aristocratic family, as the youngest child of the Hon. Charles Lindsay, son of the 24th Earl of Crawford and 7th Earl of Balcarres. She was privately educated, and an early interest in art was encouraged by her parents. In 1882, at the age of twenty-six, she married Henry Manners, the only son and heir of the Duke of Rutland. The two were, however, very different in character, with Henry Manners lacking the artistic and intellectual interests and cultural sophistication of his bohemian wife. In 1888 her husband became the Marquess of Granby, and in 1906 he succeeded his father as the 8th Duke of Rutland. Violet Manners was a prominent member of the Souls, an artistocratic social circle at the end of the 19th century that favoured avant-garde art and intellecual pursuits, and whose members included Arthur Balfour, George Wyndham and the Tennant sisters. A famous beauty, Violet was painted by several artists, including Jacques-Emile Blanche, William Rothenstein, George Frederic Watts and, most notably, James Jebusa Shannon.Although she had no formal training as an artist, Violet was an accomplished portraitist, working in pencil or silverpoint on paper. In 1877, at the age of twenty-one, Violet exhibited her drawings at the newly-established Grosvenor Gallery, which had been founded by her cousin, Sir Coutts Lindsay. Among her sitters were statesmen such as Herbert Asquith, Arthur Balfour, Winston Churchill and Cecil Rhodes, the writer Rudyard Kipling, the pianist and composer Ignacy Jan Paderewski and the actresses Mary Pickford and Marion Terry, as well as many of the noblemen and aristocratic women of her social circle. The death of her eldest son, Lord Haddon, in 1894, at the age of nine, was a terrible blow, and Violet channeled her grief into sculpting his tomb memorial. This superb sculpture, which portrayed the young boy reclining on an elaborate base decorated with relief portraits of his family, is today in the chapel at Belvoir Castle in Leicestershire, the seat of the Dukes of Rutland. (A plaster of the work was kept by Lady Granby at her home in London until shortly before her death, when it was acquired by the Tate Gallery.) Violet maintained a studio at Bute House in Kensington, and showed her work at the New Gallery, the Royal Academy and the Fine Art Society, as well as in France and America. In 1900 she published a book of her drawings entitled Portraits of Men and Women. As one critic noted, in a review of an exhibition of her portrait drawings at a gallery in London in 1925, 'Her style is particularly suited to the interpretation of feminine beauty and elegance, but she usually achieves considerable success in her delineations of men.' Eight years later, a review of another exhibition of her portrait drawings noted that, 'There is no doubt that Her Grace is a charming draughtswoman, intensely feminine and and so passionately devoted to "the beautiful' that she would fain invest even men with its feminine quality; but as she confines herself to the pencil and wields it with real taste one can enjoy the masculine portraiture almost as much as the others.' After her husband's death in 1925, Violet moved to Belgrave Square, where she built another studio. She continued to exhibit her work regularly, her last exhibition taking place just a month before her death in December 1937. She was buried at Belvoir Castle.