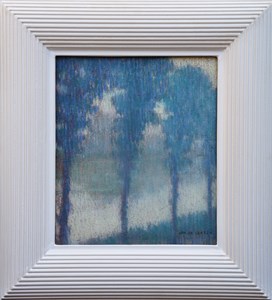 Born in Ostend, Jan de Clerck studied briefly with the painter Camille Payen in Brussels around the turn of the century, but was, for the most part, self-taught. He was much influenced by the exhibitions organized by the group La Libre Esthétique, and his first paintings date from the late 1890s. Quickly gaining in confidence and ability, De Clerck first exhibited his paintings in 1905. He soon developed an original technique of a sort of elongated pointillism of striped brushstrokes, producing landscapes and seascapes tinged with a Symbolist aesthetic. As one modern writer has noted of the artist, de Clerck 'adapted pointillism and the concentration of light to produce his own technique, often worked in mixed media, of dragging the paint with short vertical strokes in order to build up the surface of the picture. This individual technique De Clerck made virtually his own and much of his best work up to circa 1920 is painted in this way.' In 1908, frustrated with his lack of success at gaining entry to the prestigious Salon des Beaux-Arts, de Clerck formed the art society Cercle Artistique d'Ostende, which included several local artists as well as his brother Oscar, a sculptor, and he exhibited with the group until 1914.With the outbreak of the First World War and the invasion of Belgium by Germany, Jan and his brother Oscar escaped to England. This period of exile found the young artist painting landscapes and camouflage, taking part in local exhibitions, and and befriending such artists as Frank Brangwyn. After the war, de Clerck returned to Ostend where his reputation continued to grow. He experimented with new techniques, often mixing pastel and watercolour, which he called 'aquapastel', to create the luminous effects he sought. The 1920s found de Clerck painting more figurative subjects, executed in a brightly coloured, somewhat naive manner, with folkloric subjects and compositions influenced by a visit to Brittany in 1920. He also started an art school in his studio. On the occasion of two concurent exhibitions of de Clerck's work in Ostend in 1927, James Ensor noted, in a letter to the organizing committee, that 'I wish to greet discretely this industrious and enterprising colleague, the rare seeker of youth and illusion.' Further exhibitions of his work in Ostend, Liège and Ghent, as well as the publication of a book of reproductions of his work in 1928, served to advance his reputation. After 1933, however, there were no major exhibitions of his work for almost twenty years, until 1951. His output began to decline, and he began to focus mainly on seascapes, always his favourite subject.