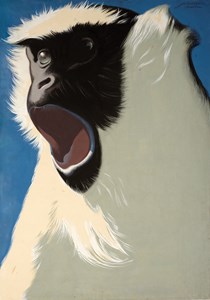 A painter and graphic artist, Horst Naumann trained in Dresden with the portrait painter Johannes Uhlig between 1923 and 1925, before entering the Kunstakademie in Dresden, where among his teachers was Otto Dix, and where he also later taught. He also studied decorative painting at the Staatlichen Akademie für Kunstgewerbe in Dresden. In 1927 Naumann joined the KPD, the Communist Party of Germany, and two years later became a member of a local Association of Revolutionary Visual Artists. At around this time he painted the overtly propagandistic canvas Weimar Carnival, today in the collection of the Staatlichen Kunstsammlungen in Dresden. Also from 1929 onwards Naumann worked as a cartoonist and illustrator for the Marxist KPD newspaper Die Rote Fahne, as well as other radical publications. In the 1930s he began working as a commercial artist and producing radical propaganda posters. Arrested by the Nazis in 1934, Naumann served a six-month sentence in prison as a political prisoner. Drafted into the Wehrmacht and assigned to a punishment battalion in 1939, he served in the army until 1943. After the end of the Second World War, Naumann worked as a freelance commercial graphic artist in Dresden. One of his first postwar posters was entitled The New Dresden, and accompanied a 1946 exhibition showcasing the plans for the reconstruction of the city. In 1952 Naumann joined the VBK, the Association of Visual Artists in Dresden, and was to become a leading and longstanding member of the organization. By this time he had established a reputation as one of the leading designers of posters and advertisements in East Germany, often winning prizes in poster competitions, and it is for his posters that he is perhaps best known. In the late 1950s, 1960s and 1970s he also designed several series of postage stamps - many depicting animals or Old Master paintings - for which he won a number of awards, and also designed postcards, stationery and much more. He also devoted considerable time to educating local factory workers about art, opening his studio to them, speaking about his work, and often acting as a guide for gallery and exhibition visits. In 1978 he was awarded a Patriotic Order of Merit medal by the East German state, one of many awards and prizes he garnered throughout his successful career. Comprehensive exhibitions of his work were held in Dresden in 1978 and 1988, and in his birthplace of Riesa in Saxony in 1983. A large collection of Naumann's political, propaganda, advertising and publicity posters is today in the collection of the Stadtgeschichtliches Museum in Leipzig, and many other examples of his work are to be found in museums in Dresden, Berlin, Bonn and Koblenz. Some of his posters were included in the survey poster exhibition Dresden Plakativ! Kunst, Kommerz und Propaganda im Dresdner Plakat (1865-1990), held at the Stadtmuseum in Dresden in 2011.