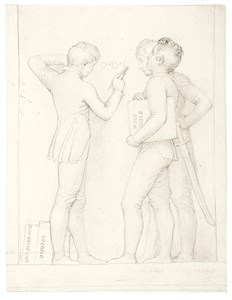 The son of a plaster castmaker and sculptor, John Flaxman was a sickly child and spent much of his youth drawing the casts in his father’s workshop. He first exhibited at the Royal Academy in 1770, at the age of fifteen, and won a silver medal. The same year he entered the Royal Academy Schools to study sculpture, and there met William Blake and Thomas Stothard, who were to become close friends. After his graduation in 1775 Flaxman was employed, alongside his father, as a designer at the Wedgwood factory, where his drawings for porcelain decorations were characterized by a strong linear style. He also continued to exhibit his work almost every year at the Royal Academy, and began to receive sculptural commissions for funerary monuments. In 1787 he was able to travel to Italy with the financial assistance of Wedgwood and other patrons. Although he had only planned to stay in Italy for two years, he was to remain in the country until 1794, achieving considerable succeess and counting among his patrons the Earl of Bristol, Georgina, Countess Spencer, and Thomas Hope. While in Italy he also made numerous drawings, notably illustrations to the literary works of such classical authors as Aeschylus, Homer, Hesiod and Dante, many of which were engraved and widely disseminated. Flaxman returned to England with an established international reputation, and embarked on a highly successful career as a monumental sculptor, with significant commissions for tomb monuments and statues for Westminster Abbey, St. Paul’s Cathedral, and elsewhere. Elected a full member of the Royal Academy in 1800, he was by now regarded as the leading English sculptor, and ten years later was appointed the first Professor of Sculpture at the Royal Academy Schools. Flaxman remained much in demand as a sculptor until the end of his career, while his work as an illustrator reached a climax in the publication of his illustrations to Hesiod, engraved by William Blake, in 1817.