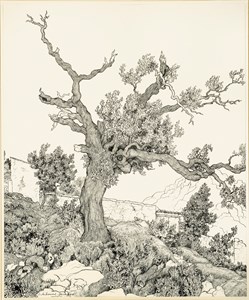 A writer, poet, playwright, artist and musician, Georges Ribemont-Dessaignes was already something of a polymath in his youth. By the age of sixteen he was playing the flute, composing symphonies and operas, was interested in philosophy, and was also thinking of becoming a painter. To this end he enrolled in the Académie Julian, where he studied with Jean-Paul Laurens, and the Ecole des Beaux-Arts. In 1909 Ribemont-Dessaignes became friendly with the sculptor Raymond Duchamp-Villon, and through him met his brothers Marcel Duchamp and Jacques Villon, becoming part of their circle at Puteaux, alongside Jean Metzinger, Albert Gleizes and Fernand Leger. He abandoned painting in 1913 but took it up again after the First World War, painting mechanistic works akin to those of his friend Francis Picabia. He also published poems in the magazine 391, founded by Picabia, together with several pamphlets of art criticism. Several of his paintings and drawings were exhibited at the gallery Au Sans Pareil in 1920, although the show was a failure. By this time Ribemont-Dessaignes had become closely associated with the Dada movement. He was one of the leading members of the group, alongside Tristan Tzara, and contributed to the Dada periodical Literature, as well as writing texts and short plays inspired by the movement’s anti-establishment principles. By 1922, however, Ribemont-Dessaignes, Tzara and Paul Eluard had broken with André Breton, causing the implosion of the Dada movement in Paris. Only tangentially associated with Breton’s Surrealist movement in the 1920s, Ribemont-Dessaignes continued to work as a novelist, playwright and opera librettist during this period. Among his novels were L'Autruche aux yeux clos, published in 1924, Ariane, which appeared the following year, and Céleste Ugolin, published in 1928, as well as the largely autobiographical Adolescence, published in 1930. Between 1929 and 1931 Ribemont-Dessaignes served as editor-in-chief of the magazine Bifur, but he spent most of the next decade living away from Paris, first in the Dauphiné and then in the Ardèche. After the Second World War he settled in Juan-les-Pins, on the Côte d’Azur. Now in his sixties, he wrote prefaces to literary works by such authors as Diderot, Rimbaud, Stendhal, Tolstoy and Voltaire, as well as books and articles about artists, including Georges Braque, Jean Dubuffet, Joan Miro and Picasso. He also recorded radio interviews with Marc Chagall, Henri Matisse and Tzara, and published several books of poems. Ribemont-Dessaignes had begun to draw landscapes in 1944, when he settled in the South of France. In 1955, following his move to Saint-Jeannet, near Vence, he undertook a series of pen drawings of rocks and trees around the hilltop village. At the end of the same year an exhibition of thirty drawings of trees by the artist was held at the Galerie Mirador in Paris. Many of his later works were exhibited at the Galerie Chave in Vence, founded by his close friend Jacques Chave.