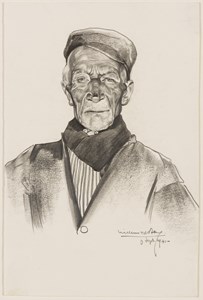 The son of the painter and printmaker Andries van den Berg, who taught at the Koninklijke Academie in The Hague, Willem van den Berg also spent time in the studio of his cousin, the painter and painting conservator Carel de Wild. Soon after completing his training in The Hague, van den Berg began exhibiting his work in group shows and solo exhibitions. In 1913 he met the painter Willem van Konijnenburg, whose style was to prove influential on the young artist, and began to paint the fishermen, women and ships on the beach at Scheveningen. He also painted still lifes, landscapes, genre scenes and portraits, as well as studies of birds and animals, and in 1926 one of his paintings was exhibited in Paris. In 1938 van den Berg settled in Amsterdam, where he was appointed a professor at the Rijksakademie van Beeldende Kunsten. From there he made frequent visits to the small picturesque fishing village of Volendam, where he found numerous subjects to paint and draw. A member of the artist’s societies Arti et Amicitiae in Amsterdam and Pulchri Studio in The Hague, van den Berg worked well outside the avant-garde trends of the art of the 20th century. Although his realist style became less popular in Holland after the Second World War, the artist found some success in America in the 1960s, when several exhibitions of his work were held at galleries in New York, Chicago and San Francisco. He also produced lithographs and linocuts, and his work can be found today in several Dutch museums.