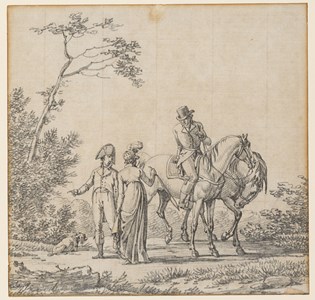 After studying with his father, the painter and sculptor François-Louis Swebach, the young Jacques-François Swebach left his native Metz and settled in Paris, where he completed his training with the landscape and genre painter Claude Michel Hamon Duplessis. He began exhibiting at the Salon in 1791, using the name Desfontaines, and soon gained a reputation for his paintings and drawings of horses and military scenes. He was appointed premier peintre at the Manufacture de Sèvres porcelain factory, a post he held from 1802 to 1813, and designed many plates and cups. One of his most important projects at the Sèvres factory was the translation of the designs of Egyptian scenes by Baron Vivant Denon, made during Napoleon’s campaigns in Egypt, onto two superb dessert services, one of which was presented to the Czar of Russia, Alexander I. It was Swebach’s fame as a designer that led the Czar to summon him to Russia, and between 1815 and 1820 he worked in Saint Petersburg as the chief painter of the Imperial porcelain works. However, he continued to send small cabinet pictures back to Paris to be exhibited at the Salons, where they were much admired. These works made up a large part of his painted output, and Swebach’s paintings of horse fairs and markets, battle and hunting scenes were acquired by a large and enthusiastic group of private collectors. Among his few official commissions was a long, frieze-like painting of a Cavalcade et promenade en calèche commissioned in 1800 by the Empress Josephine for her château at Malmaison and regarded as one of his finest works. He also produced a large number of engravings of military and equestrian subjects, and in 1806 published his Encyclopédie pittoresque, a series of lithographs of horses. Described by the painter and art critic Pierre-Marie Gault de Saint Germain as the ‘Wouwermans of our times’, Swebach continued to send works to the Salons until 1823, receiving a medal in 1810 for a painting of Napoleon Crossing the Danube. Paintings by the artist are in a number of public collections in France, notably the Musées des Beaux-Arts in Lyon and Marseille, and the Musée des Augustins in Toulouse.