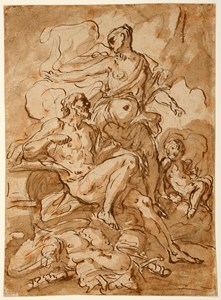 The 17th century Venetian artist Antonio Molinari was trained in the studio of Antonio Zanchi, and his early work is marked by the same tenebrism as his master. He soon began to develop a lighter, more colourful style, however, and this can be seen in the much of the work of his mature career, which was marked by a series of important, large-scale commissions and altarpieces for churches in Venice and the Veneto. When he died in 1704, at the age of forty-nine, Molinari was at the height of his success. Among his pupils were Federico Bencovich and Giambattista Piazzetta, as well as the young Giovanni Battista Piranesi.Although many of Molinari’s drawings were previously attributed to his Venetian contemporary Giovanni Antonio Pellegrini (1675-1741), a stylistically coherent corpus of his drawings has recently been established through connections with paintings by the artist. Molinari’s drawings are characterized by a particular freedom of handling and expression. As one modern scholar has noted of the artist’s drawings, ‘Many were sketched first in graphite, with the light gray line of the pencil moving rapidly and freely over the paper as it blocked in the positions of figures and indicated their general contours. It was then loosely reinforced with ink or chalk, giving the form further definition but freely modifying the original shapes or placement when the artist felt that it was necessary. The pen line is looping or fluid, swelling and tapering in a highly expressive motion. The energy of this line sometimes compensates for a certain lack of invention...In many ways, Molinari’s technique prefigures that of Tiepolo. The drawings of both artists have the character of painterly studies rather than carefully delineated, completely thought out renderings. This is not to belittle the skill with which they are drawn – command of form and technical confidence is apparent in every mark – but to recognize a basic quality that relates to the painterly concerns of both artists, a very Venetian quality at that.’ The largest extant collection of drawings by Molinari, numbering between ninety and one hundred sheets, is in the Museum Kunst Palast in Düsseldorf, while another large group of some sixty drawings is in the Louvre.