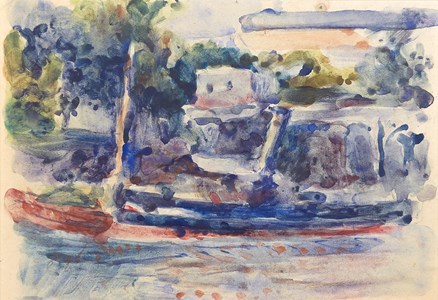 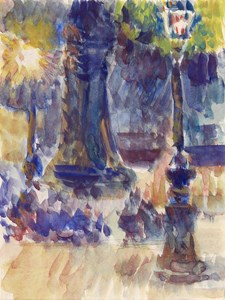 Born into poverty, Louis Hayet left school at the age of twelve to earn money to help support his family, although he was able to study briefly at the Ecole des Arts Décoratifs. When time permitted, he would paint and draw in the countryside surrounding his native town of Pontoise, and it was there that he was introduced to Camille Pissarro and his son Lucien. In the early 1880s Hayet painted numerous small watercolours in and around Pontoise, while employed by a firm of decorators. By 1885 he had became closer to Pissarro, and through him met Paul Cézanne and, the same year, Paul Signac. He also met Georges Seurat, and in 1886 was one of the first artists, along with Pissarro, to see newly-completed A Sunday Afternoon on the Grande Jatte in the artist’s studio. Hayet began working in a pointillist manner in the late 1880s, and for a time was able to rent a small studio in Paris, but was never able to give up his day job as a decorative painter. Despite being invited by Pissarro to join Seurat and Signac at the eighth and final Impressionist exhibition in May 1886, Hayet refused to do so. It was not until 1889 that he exhibited for the first time, showing several works at the Salon des Indépendants, including a painting of the Place de la Concorde that is now recognized as one of his finest works, and a major contribution to the Neo-Impressionist urban landscape tradition. In 1890 Hayet was invited to exhibit with Les XX in Brussels, and in 1894 had two paintings included in the sixth exhibition of Impressionist and Symbolist painters at the Galerie Le Barc de Boutteville, where he continued to show his work for the next three years. Hayet continued to work mainly as a commercial artist and a painter of stage sets, mainly for Lugné-Poe’s Théâtre de l’Oeuvre, and only occasionally found time to paint for pleasure. In 1895 he visited Lucien Pissarro in London, and also spent several months travelling around France in 1900 and 1901. In 1902 he mounted two exhibitions of his paintings, drawings and watercolours in small rented spaces in Paris, and once again in 1904, but these all proved to be commercial failures. Indeed, Hayet seems to have spent most of his career struggling for success as a painter, and was always forced to make a living in other ways. His output as a painter fluctuated depending on whether he had the time and resources to work, and there were often periods of several months or years when he painted very little. During and after the First World War he produced mainly views of Paris, while for some time in the 1920s he painted still life subjects. Hayet was by now almost completely forgotten, and did not figure in Bénézit’s three-volume dictionary of painters, completed in 1923. In the early 1930s, suffering from poor health, he had largely ceased to paint. By this time his obscurity was such that in 1934 the critic Charles Saunier published an article in the magazine Beaux-Arts which was aptly entitled ‘Hayet, peintre inconnu’. Hayet chose for his subjects Parisian street scenes, café interiors, musical performances, and circuses, as well as landscapes and portraits. He often painted in watercolour or gouache on prepared thin, translucent linen or muslin, which allowed him to take advantage of the light that would show through from the rear, and so achieve different colouristic and tonal effects; this was likely a benefit of his work as a scene painter. The scholar and collector Jean Sutter, who once owned these two watercolours and had planned a catalogue of the artist’s work, estimated that Hayet produced around 100 and 150 drawings and pastels, some 200 watercolours and gouaches, and between 400 and 500 paintings, mostly of small dimensions. He also noted that about half of Hayet’s oeuvre is lost, mostly those of larger dimensions.