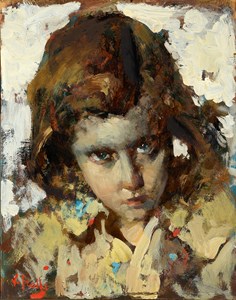 A gifted painter and draughtsman, Vincenzo Irolli was born in Naples and was inspired to become an artist by seeing the works of Francesco Paolo Michetti and the young Antonio Mancini at the Esposizione Nazionale there in 1877. He became a pupil of Gioacchino Toma and Federico Maldarelli at the Istituto di Belle Arti in Naples, and first exhibited his work when he was still in his teens. He soon came under the influence of more Impressionistic painters such as Michetti and Domenico Morelli, although his style came perhaps closest to that of the Roman painter Mancini, who was a few years older. In 1879 Irolli exhibited a genre painting at the Esposizione Promotrice in Naples, which won the first prize. Throughout his career, the artist made a particular speciality of genre paintings, as well as depictions of mothers and their babies, young Neapolitan girls, interior scenes, portraits, still life subjects and religious scenes. In 1890 Irolli joined the Circolo Artistico Napoletano, and at around the same time joined several other local artists, including Giuseppe Casciaro, Vincenzo Migliaro, Attilio Pratella and Giuseppe De Sanctis, in contributing to the painted decoration of the elegant Caffe Gambrinus in the centre of Naples. He continued to exhibited widely throughout Italy - notably in Naples, Venice and Milan, and also in Barcelona, Berlin, London, Munich and Paris – well into the 20th century. As one review of the Venice Biennale of 1920 noted, ‘We notice also with great pleasure the interiors and figure studies of Vincenzo Irolli, warm in color and full of light.’ Irolli’s paintings came to be much in demand among Neapolitan collectors, as well as with art dealers and collectors in France, England and Germany. Irolli was highly praised as a draughtsman throughout much of his career. In 1923, when several of his works were included in an exhibition of the work of Italian and European watercolourists in Milan, a review of the exhibition in an American magazine noted that ‘among the figure work the five paintings by Vincenzo Irolli claim a front place through their marvelous technique giving an effect which equals and almost surpasses that of oil painting in richness and deph of color.’As Leopoldo Montanari, a close friend of the artist and a major collector of his work, wrote poetically of his work, ‘Irolli ha la facilità portentosa del disegno, une percezione cromatica perfetta, un senso profondo dell’anatomia e un pennelleggiare rapido come il lampo. In pochi istanti ferma sulla tella con una verità sbalorditiva l’impressione fugace di un temporale, di un tramonto, di un effetto luce, il sorriso di un fanciullo, il respiro di un bimbo che dorme, le sembianze di un ospite, l’agonia di un pesce.’