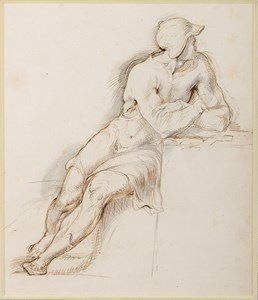 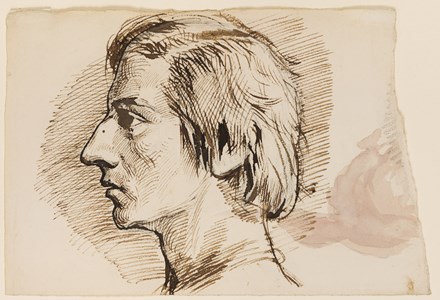 A disciple of Willam Blake and a close friend of Samuel Palmer, George Richmond formed - with Palmer, Edward Calvert and other followers of Blake - a small group who called themselves ‘The Ancients’. The only member of ‘The Ancients’ who received a conventional academic training, Richmond entered the Royal Academy Schools in December 1824, at the age of just fourteen, and there studied under Henry Fuseli. It was while he was at the Academy Schools that he first showed himself to be an accomplished and gifted draughtsman. Between 1824 and 1828 Richmond often joined Blake, Palmer, John Varley and others at John Linnell’s Hampstead home to draw from nature, as he also did with Palmer at Shoreham in Kent for several weeks in 1827. After his marriage in 1831, Richmond began working primarily as a portrait painter, quickly achieving a considerable measure of success. Although much influenced by Michelangelo and Italian art of the Renaissance, it was not until 1838 that Richmond was able to visit Italy, when he travelled with Palmer to Rome. In the 1840s he became friendly with John Ruskin, of whom he produced two portraits, exhibited at the Royal Academy in 1843 and 1857; the second of these was later engraved. Elected to the Royal Academy in 1866, Richmond’s stature in the London art world was such that he was twice offered the directorship of the National Gallery, which he twice declined. It is as a portraitist that Richmond is best known today, and which accounts for the bulk of his extant oeuvre as a painter. As his biographer Raymond Lister has noted, ‘Richmond was in fact at his greatest as a portrait painter. Despite yearnings to express himself in other ways, despite his early promise as a visionary painter, it is in portraiture that his true stature is to be seen.’