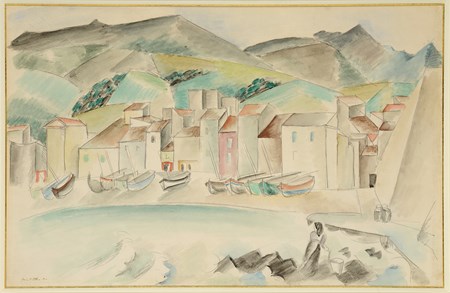 Apprenticed to an ornamental sculptor, André Lhote studied at the Ecole des Beaux-Arts in Bordeaux, training as a sculptor while painting in his spare time. In 1905 he decided to devote himself entirely to painting, while at the same time supporting himself by working as an art teacher. The following year he was introduced to Gabriel Frizeau, one of the very few collectors of modern art in Bordeaux, who went on to assemble a fine collection of Lhote’s work. After being rejected several times by the Salon des Amis des Arts de Bordeaux, Lhote was accepted at the Salon d’Automne in Paris in 1907. The following year he also showed at the Salon des Artistes Indépendants, where he was to exhibit yearly from then on. Lhote's early paintings, executed in a Fauvist stye, show the influence of Paul Gauguin, and in 1910 he had his first solo exhibition at the Galerie Druet in Paris. He was greatly inspired by the paintings of Paul Cézanne that were shown at the Salon d’Automne in 1910, and Cézanne’s influence was to resonate in much of his later work. At the Salon d’Automne of 1911, his painting of The Port of Bordeaux was hung alongside works by Albert Gleizes, Fernand Leger, Jean Metzinger and Jacques Villon, among others. By the following year Lhote had become associated with a group of artists, all working in a synthetic Cubist style, known as the Section d’Or, which included Gleizes, Leger, Metzinger and Villon, as well as Robert Delaunay, Henri le Fauconnier and Juan Gris. Due to his health, Lhote served in the army for only a brief period during the First World War, and spent much of the war years in Paris and Arcachon. Very active as a writer and critic, he published numerous books of essays and art history, and served as the art critic for the Nouvelle Revue Française between 1917 and 1940. He established his own art school, the Académie André Lhote, in Montparnasse in 1922, and also lectured on art extensively both in France and abroad through the 1950s; in Algeria, Belgium, Brazil, Egypt, England, Hungary and Italy. Indeed, as a result of his popularity as a lecturer and writer, Lhote’s work became very well known and influential outside France, particularly in the 1920s and 1930s. While views of the ports of Bordeaux and Marseille were to be among Lhote’s favourite subjects as a painter, his later work of the 1940s and beyond found him in a more lyrical mood, with an emphasis on serene landscapes. In 1956 he won the Grand Prix National des Arts, and two years later a major retrospective exhibition of Lhote’s work was held at the Musée d’Art Moderne in Paris.