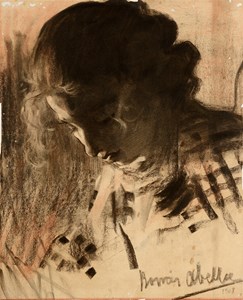 A painter and art restorer, Vicente Borrás y Abella received his initial training from his father, Vicente Borrás y Mompo, before enrolling at the Escuela de Bellas Artes in Barcelona, where he was later to become a professor. He painted mainly portraits and genre scenes, as well as landscapes, seascapes and interiors; works characterized by a strong luminosity and vibrant colours. He won several awards at exhibitions in Spain during his career, as well as a second prize medal at the Exposition Universelle in Paris in 1900. Borrás y Abella was also a skilled conservator, and worked for several Spanish museums and Catalan collectors.