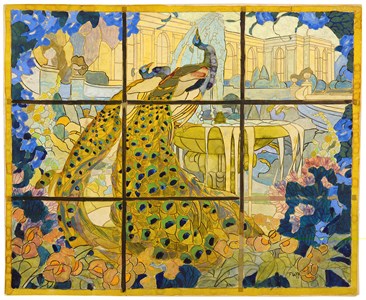 The German decorative painter, designer and illustrator Franz Waldraff studied in Düsseldorf before moving to Paris in 1902. He exhibited at the Salons between 1903 and 1909, and at the Salons of the Société des artistes décorateurs between 1910 and 1914. At the gallery La Maison Moderne he met the French designer and peintre-décorateur Clément Mère (1861-1940), and the two artists soon began working in partnership. Mère produced furniture and objects in wood, ivory and precious metals after Waldraff’s designs or decorated by him; several collaborative pieces are today in the collection of the Musée des Arts Décoratifs in Paris. Waldraff also designed silk brocades that were manufactured in Lyon for several Parisian fashion houses, as well as producing book illustrations, designs for stained glass panels, and decorations for a hôtel particulier on the Champ de Mars in Paris. Among his drawings are numerous decorative designs, as well as watercolours of, and inspired by, the dancer Isadora Duncan. Waldraff later settled in Menton in the South of France; although he is often said to have died there just before the Second World War, it has been claimed by a descendant that he in fact died much later, in Nice in 1961.