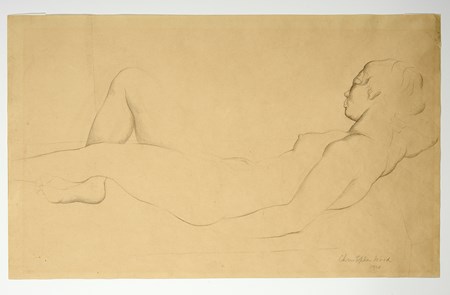 Born near Liverpool, John Christopher (always known as Kit) Wood was largely self taught as an artist. In March 1921, at the age of twenty, he arrived in Paris at the invitation of the prominent French banker and collector Alphonse Kahn, with whom he stayed for several weeks. Wood returned to Paris later that year and enrolled at the Academie Julian. It was while he was in France, some months later, that he wrote to his mother, ‘You ask me what I am going to be: - I have decided to try and be the best painter that has ever lived...I want to paint everything that touches the human being.’ The modern French artists he most admired, and from whom he took inspiration, were Paul Cézanne, Henri Matisse, Pablo Picasso and Vincent Van Gogh, as well as André Derain, Raoul Dufy, Albert Marquet, Amedeo Modigliani and Maurice de Vlaminck. Among Wood’s earliest successful paintings were a range of still life subjects, and in later years the artist came to be admired in particular for his flowerpieces.One of Wood’s early patrons and supporters was a Chilean diplomat and socialite, José Antonio de Gandarillas, who became his friend, lover and travelling companion for nearly seven years. (Gandarillas also introduced the young artist to opium, to which he was to remain addicted for the rest of his life.) The period between 1922 and 1924 found Wood travelling with Gandarillas around Europe and North Africa, while also studying briefly with Maurice Denis in 1923 and, two years later, with André Lhote. Wood divided his time between London and Paris for several years, and enjoyed a close relationship with several figures of the European avant-garde, including Picasso, Jean Cocteau (with whom he briefly shared a studio) and the ballet impresario Sergei Diaghilev, among others. For the remainder of his career he continued to spend much of his time in France, working in Paris, the Côte d’Azur and, towards the end of his life, in Brittany. In 1926 Wood created designs for a production of Romeo and Juliet for Diaghilev’s Ballets Russes, although they were never used, and in the same year exhibited with the London Group and became a member of the Seven and Five Society. It was at this time Wood met the artists Ben and Winifred Nicholson, who were to become lifelong friends and travelling companions, as well as champions of his work. The three artists worked together in Cornwall, and in 1927 shared an joint exhibition at the Beaux-Arts Gallery in London. The following year Wood joined the Nicholsons at Feock and St. Ives in Cornwall, where he spent several months. (Wood came to love Cornwall, which he had first visited in 1926, and he returned there in 1930, spending three weeks in Mousehole.) Wood received his first one-man exhibition in 1929 at the gallery of Arthur Tooth and Sons in London. The last two summers of Wood's life were spent mostly in the port towns of Douarnenez and Tréboul in Brittany, where he produced a number of landscapes and genre scenes, characterized by a consciously ‘naive’ or primitive style, that are generally regarded as some of his finest works. In May 1930 he shared a joint exhibition with Ben Nicholson at the Galerie Georges Bernheim in Paris, wher he showed twenty-five paintings. Just over three months later, in August 1930, Wood died – apparently a suicide – when he was hit by a train at Salisbury railway station. He was just twenty-nine years old, and his brief career had lasted around eight years. A large and comprehensive retrospective exhibition of Wood’s work, numbering around five hundred paintings and four hundred drawings and watercolours, was held at the New Burlington Galleries in London in 1938, and was visited by around fifty thousand people.