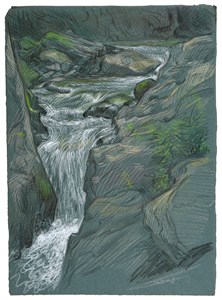 Paul Cadmus was, from early in his career, recognized as a gifted draughtsman. At the age fifteen, he enrolled at the National Academy of Design in New York, where he remained for six years before entering the Art Students League of New York. He began his career working as a commercial illustrator for an advertising agency in New York, and it was while at the Art Students League that he met his longtime lover, the painter Jared French. The two men travelled together in Europe in the early 1930s, settling for some time in Majorca, before returning to America in 1933. Cadmus soon began working for the New Deal agency known as the Works Progress Administration, painting murals for public buildings; works in which he was much influenced by the social realist painters Reginald Marsh and Kenneth Hayes Miller. Although Jared French married Margaret Hoening in 1937, he and Cadmus continued to be close, and the two artists shared a studio for many years. (As a threesome, the two men and Margaret later formed a photographic collective known as PaJaMa.) It was French who encouraged Cadmus to move away from commercial illustration towards fine art. Fascinated by Italian Renaissance painting, Cadmus began painting solely in egg tempera in the 1940s. He was elected to the National Acadeny of Design as an associate in 1979, becoming a full Academician the following year. As a draughtsman, Cadmus had a particular preference for toned paper. Drawings by Cadmus are today in the collections of several American musuems, including the Addison Gallery of American Art at Phillips Academy in Andover (MA), the Art Institute of Chicago, the Modern Art Museum in Fort Worth, the Hood Museum of Art in Hanover (NH), the Museum of Modern Art and the Whitney Museum of American Art in New York, the Smith College Museum of Art in Northampton (MA) and the National Museum of American Art in Washington, DC.