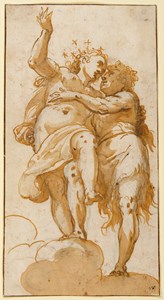 Alessandro Maganza was the son of the painter and poet Giovanni Battista Maganza the Elder, with whom he began his training before completing his apprenticeship in the studio of Giovanni Andrea Fasolo. Although he worked briefly in Venice between 1572 and 1576, there coming into contact with the work of Tintoretto and Palma Giovane, Maganza spent most of his career in his native city of Vicenza. His large workshop came to dominate the artistic scene in the city in the late 16th and early 17th century, producing paintings for numerous churches and palaces in and around Vicenza, as well as further afield. Maganza’a earliest documented work is a Madonna and Child with the Four Evangelists, painted in 1580 for the monastery of Monte Bérico in Vicenza, which shows the influence of Palma Giovane. Among his later commissions were several works for the cathedral of Vicenza, as well as a cycle of pictures painted between 1603 and 1613 for the chapel of the Rosary in the church of Santa Corona. Maganza received commissions from patrons in Bergamo, Brescia, Padua, Cremona, Pavia and Milan, and, apart from religious works, also painted mythological and allegorical subjects, as well as contributing significantly to the interior decoration of Andrea Palladio’s Villa Rotonda, near Vicenza. His sons Giambattista the Younger, Marcantonio and Gerolamo were all active members of the Maganza studio in Vicenza.Maganza’s biographer Carlo Ridolfi writes that he ‘wielded the pen as easily as the brush’, and the artist is arguably better known today as a draughtsman than as a painter. As one modern scholar has opined, ‘Alessandro Maganza is the most striking example of an unusual syndrome that characterized much of the painting done in Vicenza in the late Renaissance. Doggedly academic in a hybrid pictorial style, he would be entirely forgotten today were it not for his brilliant drawings...[Maganza produced] a sizable surviving drawing oeuvre that is spontaneous, expressive, and capable of continual – seemingly effortless – invention, a quality almost entirely absent from his paintings.’ Maganza’s pen and wash drawings, executed with a characteristic flair, show the influence of his Venetian sojourn and, in particular, the draughtsmanship of Palma Giovane. Drawings by Maganza have, indeed, often been confused with those of Palma Giovane, as well as with those of his own pupil, Francesco Maffei.