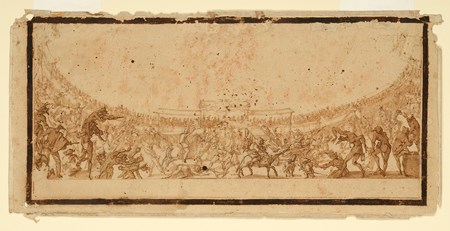 One of the leading artists of the School of Lorraine, centred at the ducal court at Nancy during the first half of the 17th century, Jacques Callot may have studied with Jacques Bellange, but was only sixteen when he left France for Rome, where he completed his training with the engraver Philippe Thomassin. In 1611 Callot settled in Florence, where he spent ten productive years, gaining the patronage of Christine of Lorraine, the widow of the Grand Duke Ferdinando I de’ Medici, and her son Cosimo II de’ Medici, Grand Duke of Tuscany. Working for the Medici court and other important local patrons, Callot produced a large number of prints and drawings, including religious and allegorical subjects, landscapes, designs for stage sets and festivals and scenes of daily Tuscan life, of which his masterpiece was the large etching of The Fair at Impruneta, published in 1620. After the death of Cosimo II in 1621, Callot returned to his native Nancy, where he worked for the rest of his career, apart from brief visits to Paris and the Netherlands. He continued to produce the type of etching that had made his reputation in Florence, often reworking ideas and compositions first developed in Italy. He also found a new patron in Henri II, Duke of Lorraine, for whom he produced prints of notable events at the court. The brutal French invasion of Lorraine in 1633 had a significant effect on the artist, resulting in a series of powerful etchings known as Les Grandes Misères de la Guerre. It may also have influenced the gruesome subject matter of what is arguably his most famous etching, the harrowing Temptation of Saint Anthony, executed in 1635, the year of his death. Callot died at the age of forty-three, leaving behind a large number of prints as well as almost two thousand drawings, including landscapes, figure studies, genre scenes theatre projects and religious subjects. The largest groups of drawings by Callot are today in the Uffizi and the British Museum, as well as in the collections of the Hermitage in Saint Petersburg and the Dukes of Devonshire at Chatsworth.