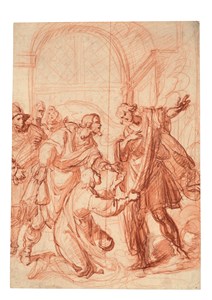 The son of a Flemish goldsmith, Giovanni Bilivert (or Biliverti) trained with Alessandro Casolani in Siena before returning to Florence and joining the workshop of Ludovico Cardi, called Cigoli, in around 1590. He became one of Cigoli’s chief assistants, and remained in his studio for some fifteen years. Between 1604 and 1608 Bilivert worked with Cigoli in Rome, and upon his return to Florence he entered the service of the Grand Duke Cosimo II de’ Medici, who in 1611 appointed him designer at the Opificio delle Pietre Dure. Bilivert’s independent career as a painter, begun in Rome with an altarpiece for the church of San Callisto, continued with much success in Florence. This was marked by such important commissions as a Discovery of the True Cross painted in 1621 for Santa Croce, a Guardian Angel four years later for the Certosa at Galluzzo and, late in his career, a Mystical Marriage of Saint Catherine for Santissima Annunziata in 1642. Bilivert also worked in Pisa, where he completed an Annunciation and a San Carlo Borromeo in Adoration for the church of San Nicola in 1611, followed several years later by a painting of Daniel and Habbakuk for the Duomo, executed between 1625 and 1630. His last known painting is a Miracle of Saint Paul, dated 1644, in the church of San Marco in Florence. Among his pupils and followers were Orazio Fidani – who wrote a manuscript biography of the master - and Agostino Melissi; both artists derived the composition of a number of their early paintings from drawings by Bilivert. Some three hundred drawings by Bilivert survive, the largest groups of which are in the Uffizi and the Louvre; many of these can be related to paintings by the artist.