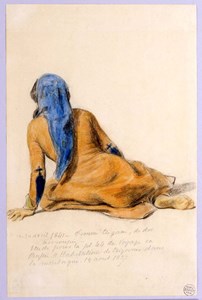 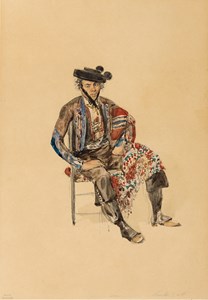 Auguste Raffet displayed a talent for drawing at an early age, and began his artistic career, at the age of eighteen, as a porcelain painter. He worked in the studio of the lithographer Nicolas-Toussaint Charlet between 1824 and 1829, and began producing his own lithographs, of Napoleonic subjects and battle scenes, in 1825. After completing his artistic training with the painter Antoine-Jean Gros, Raffet embarked on a successful career as a lithographer and illustrator. Among his patrons was Prince Anatole Demidov (1813-1870), with whom he enjoyed a lifelong friendship. In 1837 Raffet travelled with Demidov on an expedition to southern Russia and the Crimea. The party left Paris on the 14th of June 1837, travelling overland through Hungary, Walachia, Moldavia and Bessarabia to Odessa and on to the Crimea. Prevented from returning overland by an outbreak of the plague in Odessa, the group set sail from Constantinople, arriving in Marseille on the 24th of November 1837. The illustrations Raffet made on the journey were used to illustrate Demidoff’s account of the expedition, the Voyage dans la Russie méridionale et la Crimée par la Hongrie, la Valachie et la Moldavie et retour par Constantinople, dedicated to Czar Nicolas I and published in six volumes between 1840 and 1848. (An English edition appeared in 1853.) Raffet remained friendly with Demidov long after the journey, and in later years the two travelled together to Spain, Austria, Scotland and elsewhere. Raffet received numerous commissions from Demidov and acted as his artistic advisor; he was also a frequent guest at the Prince’s home, the Villa San Donato outside Florence. Raffet died in Genoa, on his way from Paris to Florence, in February 1860. A large group of Raffet’s works – numbering more than 3,800 drawings and prints – was donated by the artist’s son, Auguste Raffet (c.1840-1910) to the Bibliothèque Nationale in Paris between 1869 and 1891. The younger Raffet also served as curator of prints at the Bibliothèque Nationale.