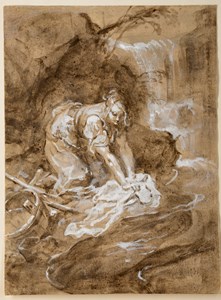 Although born in Genoa, Alessandro Magnasco left the city at a young age and received his artistic training in Milan, where his style soon departed from the more colourful Genoese manner exemplified by the work of his father, the painter Stefano Magnasco. According to the Genoese art historian and biographer Carlo Giuseppe Ratti, the younger Magnasco, who was known by the nickname ‘Il Lissandrino’, made his early reputation as a portrait painter. He also spent much of his early career as a specialist in figure painting, charged with the depiction of staffage in the paintings of other artists, notably the landscape painters Antonio Francesco Peruzzini and Carlo Antonio Tavella, as well as the architectural painter Clemente Spera. Magnasco’s own genre paintings – ‘Ceremonies of the church, schools of maids and youths, chapters of friars, military exercises, artists’ shops, Jewish synagogues...painted with humour and delight’, in the words of the 18th century art historian Luigi Lanzi – also proved very popular. Together with Peruzzini, Magnasco worked at the Florentine court of the Grand Duke Ferdinando de’ Medici between 1703 and 1709.It was only in the 1720s, when he was in his fifties, that Magnasco began to produce his own independent landscape paintings. Painted in a distinctive manner characterized by rapid brushstrokes and dissolved, almost liquefied forms, these works were invariably crowded with figures, particularly monks, hermits and beggars. That Magnasco was drawn towards such figure types is indicative of the particular influence on him of the 17th century Dutch and Flemish genre paintings that he would have seen in the Medici collections in Florence, as well as the prints of the early 17th century Medici court artist Jacques Callot. He continued to enjoy aristocratic patronage on his return to Milan, counting among his clientele members of the Borromeo and Visconti families. In 1735 Magnasco settled in his native Genoa for good, although he never really abandoned the sombre colours and interest in dramatic light effects characteristic of the Lombard tradition. Lanzi notes that his work was, in fact, more appreciated in Lombardy than in his native Genoa: ‘His bold touch, though joined to a noble conception and to correct drawing, did not attract in Genoa, because it is far removed from the finish and union of tints which these masters followed; hence Magnasco worked little in his native country, and left no scholar there.’ Although he is known to have painted a number of large religious works, the only surviving examples are a Supper at Emmaus for the Genoese monastery of San Francesco in Albaro and a remarkable Sacrilegious Robbery, painted in 1731 for the church of Santa Maria Assunta di Campomoro in the town of Siziano, and today in the Palazzo Arcivescovile in Milan. Despite the success he achieved in his lifetime, Magnasco’s work was largely forgotten quite soon after his death. His oeuvre was only rediscovered by scholars in the first quarter of the 20th century, when the artist became something of a cult figure.Reflecting the course of his career as a figurista, only a few compositional drawings by Magnasco are known today. Most of his extant drawings are, like the present sheet, studies of individual figures or small groups of figures. These fluid and expressive sheets often have the appearance of autonomous works of art, and many may have been produced as such, although in other instances they seem to have been intended to be inserted into larger painted compositions. Indeed, such figure drawings seem to have served as a kind of compendium of motifs, to be used and reused in his paintings if required. As a draughtsman, Magnasco displayed a preference for the use of the brush instead of the pen as well as, occasionally, washed or prepared paper. One of the largest groups of drawings by the artist is today in the collection of the Uffizi in Florence.