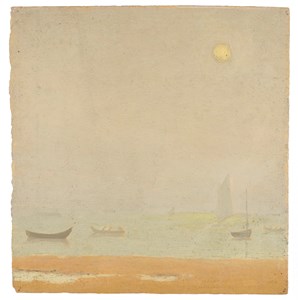 Born in the Gironde, Charles Lacoste studied at the Grand Lycée in Bordeaux, where in 1884, at the age of fourteen, he befriended the poet Francis Jammes and the future collector Gabriel Frizeau. Jammes was to be a lifelong friend and champion of the artist, while Frizeau became Lacoste’s first significant supporter and patron, in the early years of his career. (Apart from several works by Lacoste, Frizeau also came to own Gauguin’s famous frieze-like painting Where Do We Come From? What Are We? Where Are We Going?, as well as works by Odilon Redon, Andre Lhote, André Derain, Henri de Toulouse-Lautrec and many other artists.) Lacoste, whose mother was of English descent, made three trips to London; in 1894, 1896 and 1897. There he stayed in Chelsea with his friend, the writer Hubert Montague Crackanthorpe, and through him became associated with a literary and intellectual circle. He was also inspired by the work of John Constable and J. M. W. Turner which he studied on repeated visits to the National Gallery, and which influenced his own particular interest in exploring atmospheric effects in his landscapes. From 1894 onwards Lacoste’s works are characterized by a certain stillness, and he often painted landscapes at sunrise or sunset, at night or in moonlight, with snow, mist or fog. This is particularly true of the landscapes he painted in London, which capture something of Whistler’s Thames nocturnes of twenty years earlier.The first exhibition in which Lacoste took part was the Salon des Cent of 1898, organized by the magazine La Plume, to which the artist had the previous year contributed an article entitled ‘La Simplicité dans la peinture’, in which he noted: ‘Les oeuvres que, toutes nous propose la nature, comme elle, doivent être simples...’ Lacoste settled in Paris in 1899, and soon came under the wing of the philanthropist and patron Arthur Fontaine, who hosted one of the leading intellectual salons in the city. It was there that Lacoste met and became associated with such figures as the writers André Gide, Paul Claudel and Paul Valéry, the composers Claude Debussy and Darius Milhaud, and the artists Odilon Redon, Edouard Vuillard, Eugène Carrière and Maurice Denis. It was Gide who, in 1904, introduced Lacoste to the gallerist Alphonse Eugène Druet, who decided to promote and exhibit his work, which he did yearly until 1938. Among his other supporters in Paris was the Princesse Faucigny-Lucinge de Cystria, who came to own several works by Lacoste. Between 1900 and 1914, Lacoste showed frequently at the Salon des Indépendants and the Salon d’Automne, as well as with the exhibitions organized by La Libre Esthetique in Brussels in 1907 and the Toison d’Or (Golden Fleece) in Moscow the following year. He had several one-man exhibitions at galleries in Paris, notably at the Galerie Druet and the Galerie Eugène Blot, as well as at the Galerie Barbazanges in 1921 and the Galerie Raphaël Gerard in 1937. Although above all a landscape painter, Lacoste also painted around thirty portraits, mostly before 1900, and a handful of still life subjects, as well as producing cartoons for tapestries for the Gobelins factory. He illustrated books by Jammes and Gide, and also produced decorations for theatrical productions of Jammes’s La Brebis égarée in Paris in 1913 and 1923. In 1928 he was commissioned to decorate a staircase in the Palais du Luxembourg in 1928, and two years later painted a mural for the Museum d’Histoire Naturelle in Toulouse. In 1937 a retrospective exhibition of Lacoste’s work was held at the Salon d’Automne, and two years later the artist retired to the département of Pyrénées-Atlantiques in the southeastern corner of France. Several works by Lacoste are in the Musée d’Orsay in Paris, while others are in the collections of museums in Beauvais, Bordeaux, Brest, Dieppe, Honfleur, Nancy, Pau, Poitiers, Roanne, Saint-Germain-en-Laye, Saint-Quentin, Soissons, Toulouse and elsewhere in France, as well as in Algiers, Moscow and Saint Petersburg.