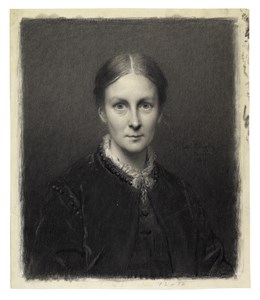 Although the painter and poet Désiré-François Laugée was very successful in his lifetime, and his work can still be found in a number of Parisian churches and elsewhere, his reputation has fallen into obscurity since his death, and he remains very little known today. Born in a village near Rouen, Laugée grew up in Saint-Quentin, where he first studied before enrolling in 1840 in the studio of François-Edouard Picot at the Ecole des Beaux-Arts in Paris. He exhibited at the Salon for the first time in 1845, showing a double portrait of a father and son (thought to be a self-portrait with his father), and it is as a portrait painter that he first established a reputation. A friend of Alexandre Dumas and Victor Hugo, he painted portraits of Hugo and the historian and writer Henri Martin, and frequently sent portraits to the Salon, until 1859. He also painted religious subjects, both in the form of easel pictures which were exhibited at the Salons and as mural paintings for such Parisian churches as Sainte-Clotilde, Sainte-Trinité and Saint-Pierre-du-Gros-Caillou, as well as the Basilica of Saint-Quentin. Laugée was also highly regarded as a painter of historical subjects, such as The Death of Zurbaran, which won a third-class medal at the 1851 Salon, and The Siege of Saint-Quentin, exhibited the following year. He won several prizes at the Salons, and a number of his religious and historical subject pictures were purchased by the State, including Saint Louis Washing the Feet of the Poor, which was shown at the Salon of 1863. Among the secular public commissions Laugée received were the decoration of the Hôtel Continental (now the Westin) on the Rue de Rivoli, as well as the cupola of the Bourse de Commerce in Paris; painted between 1888 and 1889, the latter frescoes have been detached and are now in the Musée Carnavalet. Later in his career, Laugée came to specialize in paintings of pastoral and rustic subjects, in a manner akin to the work of the artists of the Barbizon school, and among his pupils was the Realist genre painter Julien Dupré. Several paintings by Laugée are today in the collection of the Musée des Beaux-Arts in Rouen, while others are in the Louvre and the museums of Amiens, Avignon, Lille, Limoges and Troyes.