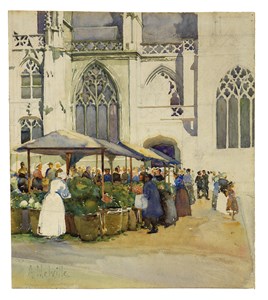 One of the finest British watercolourists of the 19th century, Arthur Melville was of humble origins. The son of a coachman, he was apprenticed to a grocer but, from the age of thirteen, took evening art classes and drawing lessons in Edinburgh. In 1875 his painting A Scotch Lassie was shown at the annual exhibition of the Royal Scottish Academy, and within a few months he was studying at the RSA Schools and sharing a studio in Edinburgh. In 1878 Melville had a painting exhibited at the Royal Academy in London, and later the same year he moved to Paris to study at the Académie Julian. He remained in France for much of the next two years, painting at Cancale in Brittany and Granville, Honfleur and Mont Saint-Michel in Normandy, before settling in the town of Grez-sur-Loing, seventy kilometres south of Paris, where there was a thriving artistic community. After a brief period back in Edinburgh, the young Melville embarked on a journey to Egypt, where he spent the latter half of 1881 and the first few weeks of 1882, before continuing his travels on to Jeddah, Aden, Karachi, Baghdad, Mosul and Constantinople, returning to England in August 1882 via Vienna, Strasbourg and Paris. This trip resulted in a number of fine watercolours of Oriental subjects, which were exhibited at the Dudley Gallery in London in 1883. The years 1884 and 1885 found Melville working as a portrait painter, and travelling throughout Scotland and to Orkney. Elected an Associate of the Royal Scottish Academy in 1886 and to the Royal Society of Painters in Watercolour in 1888, Melville moved to London the following year, although he continued to make frequent trips back to Scotland. In 1890, 1891 and 1893 he travelled around southern Spain and Morocco, working in Ronda, Córdoba, Granada, Seville, Toledo, Madrid and Tangier, while also spending time in northern Spain in 1892 and Venice in 1894; these trips also resulted in several splendid watercolours. Melville died at the age of just forty-nine, from typhoid contracted while on a final trip to Spain. Shortly after his death, retrospective exhibitions of his work were held in London, Glasgow, Newcastle and Nottingham.Although Melville produced a number of oil paintings, mainly from the late 1890s onwards, these were only rarely exhibited in his lifetime, and it is the medium of watercolour which accounts for the bulk of the artist’s output. Indeed, it is as a brilliant and gifted watercolourist that Melville is best known today. As his biographer Agnes Mackay aptly noted of the artist, ‘He could lay on colour with the freshness of a shower of rain. His control of touch was masterly...He drenched his tones with brilliant colour, making them sing together to create astonishingly fresh harmonies. Colour became alive under his hand.’Melville was particularly admired for his ability to capture bright sunlight, while his compositions were often radical and inventive. As Mackay writes, ‘Another gift was that of composing a picture, of grasping the pictorial aspects of a scene. Where others saw only confused movement and formless glitter, Melville imposed rhythm and shape...we find over and over again in his water-colours that everything is turned to effect, but that only the essentials are used. For he was content, especially in his later work, to depend on some striking arrangement of colour, on the play of light and shadow, leaving much of the paper merely tinted in a harmony of toned white. Thus apparently with the simplest means, bright splashes of colour and wide spaces of light, he realised his effects.’In his seminal and posthumously published Water-colour Painting in Britain, the artist, curator and scholar Martin Hardie gives a detailed account of Melville’s watercolour technique, as described to him by the artist Theodore Roussel, a friend of Melville’s who later married his widow: ‘Melville’s method was pure water-colour, but water-colour applied on a specially prepared paper. This paper was soaked in dilute Chinese White, till it was literally saturated and impregnated with white. He worked often into a wet surface, sponging out superfluous detail, running in those warm browns and rich blues and reds which he knew so well how to blend and simplify. His colour was often dropped onto the paper in rich, full spots or blobs rather than applied with any definite brush-marks. The colour floats into little pools, with the white of the ground softening each touch. He was the most exact of craftsmen; his work is not haphazard and accidental, as might be rashly thought. Those blots in his drawings, which seem meaningless, disorderly and chaotic, are actually organised with the utmost care to lead the way to the foreseen result.’