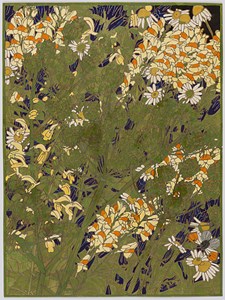 Paula Maria Rösler (or Rossler) seems to have received some training as an artist at home in Bad Rodach in Bavaria, before she left to study at art school in Munich in 1902. Since at this time women were not admitted to the Akadamie der Bildenden Künste in Munich, she enrolled at the ‘Ladies’ Academy’ known as the Münchner Künstlerinnen-Vereins, founded in 1882, where she may have studied alongside Gabriele Münter. Apart from a study trip to Florence, Rösler lived in Munich until 1915, working as a freelance artist and having her first exhibition in 1914. A gifted draughtsman in watercolour and pastel, as well as a fine etcher, she published Falter, a book of poems and lieder illustrated with her drawings, in 1905. It was in Munich that Rösler met the writer Waldemar Bonsels, who was later to achieve international fame for his children’s book Maya the Bee, published in 1912. Convinced of his talent, and almost certainly in love with him, she supported Bonsels financially in his early years, although this generosity was not reciprocated when Bonsels was famous and wealthy and Rösler was struggling. In 1915 Rösler left Munich and settled in Achenmühle in the Chiemgau region of Upper Bavaria, a picturesque area of hills, forests and lakes. She began exhibiting at the Chiemgauer Künstlerbund artist’s association, and later joined a new group of artists, known as Die Welle (‘The Wave’), of which she was the only female founding member. The group was active from 1922 to 1933, and in 1922, at Die Welle’s first exhibition, Rösler exhibited thirteen works, six of which were in the form of delicate paper cutouts known as scherenschnitte, which were much admired by visitors and critics. Rösler came to be particularly highly regarded for these silhouetted paper cutouts, which she produced in both black and white and in colours, and they account for much of her best-known work today. Her drawings and tempera paintings also began to display an interest in botanical forms, and she produced drawings and paper cutouts of detailed, close-up views of plants and flowers, drawn in an Art Nouveau or Jugendstil manner, in which the influence of Japanese art is also evident. In 1926 she married Feodor von Goeschen, and was henceforth known as Paula van Goeschen-Rösler. Her husband soon became ill and died in 1931, however, and after this Rösler settled in Wurmsdorf, where she died in 1941. Although memorial exhibitions of her work were held in Rosenheim and at the Kunstverein in Munich, Rösler remains today a very obscure figure.