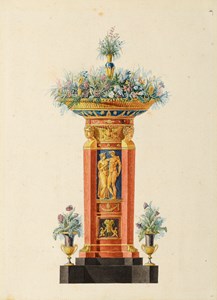 After winning the Prix de Rome for architecture in 1786, Charles Percier spent the next seven years as a pensionnaire at the Académie de France in Rome. Together with Pierre Fontaine (1762-1853), a fellow student of the architect Antoine-François Peyre, Percier sketched the monuments of ancient and modern Rome. Upon their return to Paris, Percier and Fontaine embarked on a long and successful partnership, working closely as architects and designers until about 1814. Together they published a number of books on architecture, ornament and furnishings, each accompanied by their illustrations, such as the Palais, maisons, et autres édifices modernes, dessinés à Rome, published in 1798. These were collaborative efforts in which Percier drew the architectural and sculptural elements, while Fontaine was responsible for the landscapes and figures. Percier’s first significant official commission came in 1800, when he was asked by Josephine Bonaparte to take charge of the renovation and interior decoration of her villa at Malmaison. In later years both Percier and Fontaine worked extensively for Napoleon; at the Tuileries, Saint-Cloud, Compiègne, Fontainebleau and elsewhere, as well as designing court festivities such as the coronation of Napoleon as Emperor and the ceremony of his marriage to Marie-Louise of Austria. As architects they renovated parts of the Louvre, and designed the Arc de Triomphe du Carrousel, completed in 1807. Indeed, such was their importance as architects and designers during the Napoleonic era that Percier and Fontaine can arguably be said to have created the Empire style. Much of their influence can be traced to their seminal publication Receuil des décorations intérieures, published in 1812, which served as a compendium of designs for rooms, furniture, decorations and ornament that spread the Empire style throughout Europe as well as to Russia and America. After the fall of Napoleon, the partnership of Percier and Fontaine was dissolved, although both artists continued to remain active. Percier was charged with the decoration of the cathedral in Reims for the planned coronation of King Louis XVIII, an event that never took place.